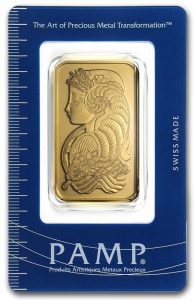 A series of suspicious transactions involving counterfeit gold bars has Winnipeg police and officers around the country investigating.

Police on November 30 became aware of six counterfeit bars exchanged for just under $5,000 at a number of pawn shops and gold buyer locations in the city.

Police say the bar and packaging were very high-quality counterfeits.

Anyone thinking about purchasing a similar bar is asked to take extra steps to ensure their authenticity.