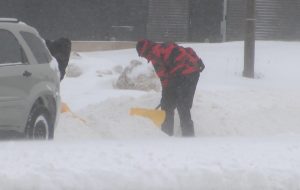 WINNIPEG — A winter snowstorm that began Christmas Day evening warped into a blizzard for much of southern Manitoba on Monday.

The Colorado low moved northeastward and was been responsible for cancelling dozens of flights out of James Richardson International Airport and shut down several highways around the province.

Blizzard conditions with poor visibility in snow and blowing snow were occurring early Monday, but had been downgraded to a winter storm warning as of 7:30 a.m. That warning was then dropped at 1:30 p.m. 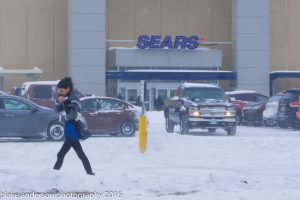 A woman walks across the parking lot of Sears Polo Park on Monday. (BLAKE ANDERSON PHOTO)

“The bulk of the snow has already fallen from this system, with a further 5 to 10 cm expected in most areas for storm totals in the 20 to 30 cm range,” Environment Canada said.

Highway 1 from the Saskatchewan border and Headingley was closed for most of the day. Highway 1 east from the Ontario border to Winnipeg was closed early Monday morning until around 6 p.m.

Highway 59 and 75 to the U.S. border also experienced closures due to blowing snow and poor visbility.

“As a result, even with the snow becoming lighter throughout the day, visibilities will be slow to improve as winds remain strong into the afternoon hours,” Environment Canada said.

“The last area to improve will be a strip from Lake Manitoba towards Emerson where poor visibilities will continue until early this evening.”

Travel is expected to be hazardous due to reduced visibility.

Other parts of southern Manitoba had remained under a blizzard warning until early afternoon.

City crews are continuing a truck plow operation on P1 regional streets and P2 collector/bus routes. A grader plow operation will commence at 7 p.m. tonight on the P1 and P2 networks.

Sanding will be ongoing to improve traction where required.

Sidewalk clearing on P1 and P2 streets will start at 7 p.m. tonight.

Clearing of back lanes will start at 7 a.m. on Tuesday, December 27.

A declared snow route parking ban is also in effect, meaning motorists shouldn’t park on any street designated as a snow route between midnight and 7 a.m. 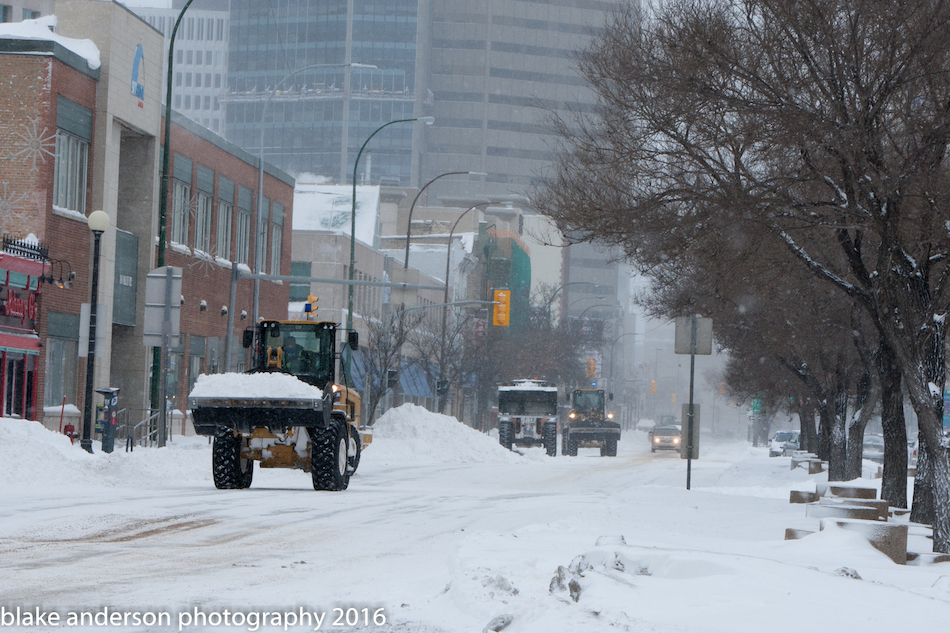 Winnipeg Transit and Handi-Transit
· Due to weather conditions, Winnipeg Transit is experiencing service disruptions and transit users should allow for extra travel time.
· Transit users should check their schedule before travelling.
· Handi-Transit has cancelled all trips except for dialysis appointments. Those with dialysis appointments are asked to call (204) 986-5711 to report when their street is cleared.
· Reminder: Winnipeg Transit is operating on a holiday (Sunday) schedule today.

Winnipeg Fire Paramedic Service
· Adverse weather conditions affect travel times for all vehicles on the road, including emergency vehicles. WFPS is currently experiencing longer response times.
· If required, Public Works crews are on standby to assist WFPS crews in responding to calls for emergency service.
· Response times are being monitored and additional resources will be placed on duty if necessary.

The City of Winnipeg is recommending that all citizens and motorists stay home today and limit travel to essential trips only. Residential streets have significant accumulations of snow and clearing operations are currently focused on the regional and collector/bus route roadways to ensure essential services are available.

Updated at 7:30 p.m. with additional information