Home » News » Coming Around: Jacob Trouba Getting Comfortable on Right Side of Jets’ Defence

Coming Around: Jacob Trouba Getting Comfortable on Right Side of Jets’ Defence 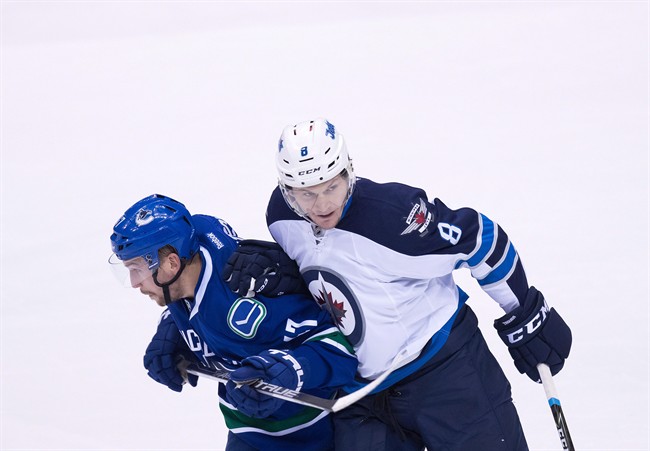 When Jacob Trouba was a holdout at the beginning of the NHL season, one reason he and his agent gave was his desire to play on his natural right side and have a bigger role in the team’s Top 2 pairings. Trouba, right, checks Vancouver Canucks’ Sven Baertschi during the second period of an NHL hockey game in Vancouver, B.C., on Thursday December 22, 2016. (THE CANADIAN PRESS/Darryl Dyck)

WINNIPEG – Jacob Trouba got what he wanted, even though it’s happened in a roundabout way.

When the Winnipeg Jets defenceman was a holdout at the beginning of the NHL season, one reason he and his agent gave was his desire to play on his natural right side and have a bigger role in the team’s Top 2 pairings. After signing a two-year, $6-million contract on Nov. 7, Trouba got into his first game Nov. 11 — but on the right side with Ben Chiarot in the third pairing.

However, unfortunate circumstances quickly changed that.

Jets defenceman Tyler Myers, the second-pairing’s veteran right-side guy, was injured in that 3-1 overtime loss to Colorado. He was placed on the injured-reserve list with an undisclosed lower-body injury and hasn’t even resumed skating with the team.

Trouba was bumped up to his spot and has taken advantage of the situation.

“Obviously, the Tyler (injury is) a big factor in that, but there’s an opportunity there for me right now and it’s up to me on how I perform,” Trouba said after Wednesday’s practice.

So far, the 22-year-old has fit in pretty well.

Trouba has logged an average 23:39 of ice time per game, second on the team behind his former partner, No. 1 right-side veteran Dustin Byfuglien.

The Michigan native has one goal and seven assists in 22 games, with two assists coming in Tuesday’s 3-1 Jets win in Chicago. Winnipeg hosts Columbus on Thursday.

“He’s in a good rhythm now, where he’s physical when he needs to be and we’re starting to see him get back up the ice the way we had hoped he would,” Maurice said.

When asked if Trouba is more effective on the right side than the left, he said he didn’t know.

“For some players it matters,” Maurice said. “I’m not sure we’ve got enough time in to tell you whether it matters.

“He’s physically stronger this year. He’s skating stronger. He’s a year older. At that age (it) makes a big difference. I think that’s where all the improvement comes in his game.”

“I think he’s a guy that can play both sides,” Enstrom said. “He’s such a good player. He can play the game.

“I think he would probably prefer being on the side he’s on right now. You can see, too, he looks comfortable over there and he’s playing great for us right now.”

Trouba assessed his progress as having a slow start to feeling “pretty good.” He said he wasn’t promised he’d play the right side when he inked his new deal.

“If I’m asked to play the left side, then I’m here and I’m going to do what’s best for this team.”

He hasn’t reflected on his holdout decision, but is glad he let his preference to play on the right side be known.

“It is what I wanted,” Trouba said. “It is a big thing of Tyler’s injury that no one can predict so I think that kind of changes everything, but I’m playing in the Top 4 on the right side right now, which is what I want to do.”

There is, though, one new position he’ll try on Friday.

Teammate Mark Scheifele said Trouba is joining him on stage for walk-on roles in the Royal Winnipeg Ballet’s production of Nutcracker.

“Me and him are going to be stars of the ballet,” Scheifele said.