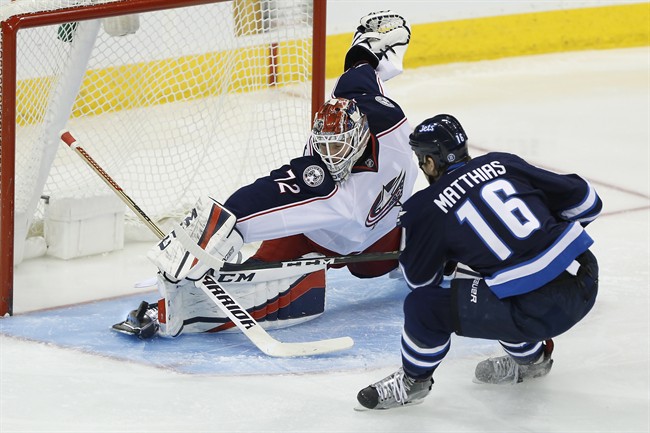 WINNIPEG – Nick Foligno and his teammates are playing with the type of confidence that comes when you keep extending a franchise-best win streak.

Foligno had a goal and two assists as the Columbus Blue Jackets won their 14th game in a row, beating the Winnipeg Jets 5-3 on Thursday.

“I think you’re starting to see a team that’s understanding that we expect to win if we play a certain way,” Foligno said. “That’s great for this organization, for our fans and this group.”

Sergei Bobrovsky made 31 saves for his 23rd win of the season, and 12th consecutive.

“(Winnipeg) had some glorious chances that they missed the net, which I thought was real important tonight. We’ll take it.”

Wheeler was asked if Columbus was the best team the Jets have faced this season.

“They’re certainly up there,” the captain replied. “You’d put them in the category of the elite in this league.

The Jets opened the scoring at 2:36 of the first period when defenceman Jacob Trouba’s straight-on shot from inside the blue line was tipped in by Matthias, but Saad evened the score at 7:55 after Columbus dumped the puck into Winnipeg’s end.

Hutchinson mishandled the puck behind the net and it went to Saad’s stick for a shot and then a rebound that he turned into his 14th goal of the season.

Jets defenceman Josh Morrissey took his second penalty of the game, leading to Foligno’s tip of Werenski’s point shot four seconds into the power play for the 2-1 lead at 16:29.

Columbus went into the game as the league’s top squad on the power play at 27.1 per cent.

Wennberg made it 3-1 at 8:21 of the second period after a Winnipeg coach’s challenge for goaltender interference was unsuccessful.

Foligno was sandwiched between Hutchinson and Jets defenceman Tobias Enstrom when Wennberg raced across the front of the net, grabbed the loose puck and fired it in.

Wennberg potted his eighth goal of the season at the 45-second mark of the third on a four-on-three.

Little’s redirection of a Drew Stafford pass during a power play narrowed the deficit to 4-2 at 6:29, but Sedlak tipped in Jack Johnson’s shot to make it 5-2 at 14:31.

“They make you pay in a lot of different ways, whether it’s on the power play or just getting traffic to the net,” Little said. “We had our opportunities, too, and we couldn’t find the back of the net on most of them.”

With Hutchinson out of the net and Winnipeg on the power play, Perreault blasted a shot past Bobrovsky with 1:33 left.

Winnipeg hosts the New York Islanders on New Year’s Eve. Columbus plays the same night in Minnesota against the Wild, who are riding a 12-game win streak.

“It’s going to be a blast,” Saad predicted. “They’re having a heck of a year and we’re playing well right now, too.

“It’s a fun building to play in. Someone has got to win, so we’re looking forward to taking that one from them.”

Jets forward Marko Dano left the game in the second with a lower-body injury after smashing into the boards.