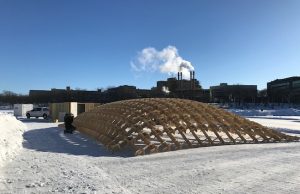 Raw: Almond is at the corner of the Red and Assiniboine rivers. (CHRISD.CA)

Winnipeg’s favourite pop-up restaurant is back on frozen ground this season. Raw: Almond has returned to the ice after last season’s mild temperatures forced it on land.

Lead designer Joe Kalturnyk and his crew were out on Wednesday putting the final touches on the structure before draping it with a tarp and moving in the equipment and heaters.

“Luckily we’ve had these cold snaps and the ice is great,” Kalturnyk said. “Even if it warms up a little, it’s still okay because the ice is pretty thick. It just makes it a little slushy.”

More than 1,500 pieces of wood are being used this year to create a “woven” theme, first envisioned by Leonardo da Vinci. Once completed, the structure will reach 15 feet high and 40-60 feet in diameter.

“We’re learning a lot about this wave building and we’re able to fine-tune it quite a bit.”

Chef Mandel Hitzer of deer + almond is the other mastermind behind the annual tradition, which is marking its fifth year. Diners will cozy up and be treated to a five-course meal each night from Winnipeg’s top chefs. Raw: Almond opens January 20 and will run through February 13.