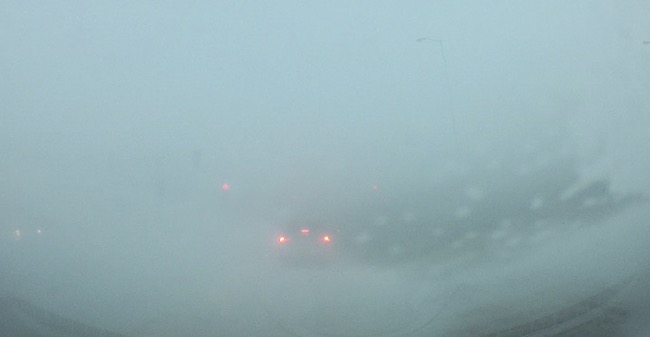 Visibility was near zero on highways and roads surrounding Winnipeg on Thursday. (CHRISD.CA)

WINNIPEG – Manitoba is being hit with high winds and blowing snow that are crippling everything from mail delivery to highway travel and airline flights.

Wind gusts of up to 90 km/h are kicking up piles of snow already blanketing the province, creating whiteout conditions and delaying flights out of Winnipeg.

Manitoba RCMP say there were more than 30 collisions by mid-morning and Environment Canada issued a blizzard and cold warning.

Major highways, including the Trans-Canada, are closed although most border crossings to the United States remain open.

The Winnipeg zoo — home to a number of hardy polar bears used to arctic temperatures — has even closed its doors due to the weather.

Canada Post says some customers may not receive mail today because the snow is making delivery difficult.

At the Winnipeg airport, officials say the wind has delayed flights due to poor visibility and made de-icing operations a challenge.

The Mounties said blowing snow was creating whiteout conditions on highways and a number of motorists had hit the ditch by Wednesday night.

A blowing snow advisory was issued for the city of Saskatoon, which was reminding drivers to go slowly on the icy streets. Similar warnings were issued in parts of Alberta, including the Edmonton area, where the winds were gusting to 60 km/h at times.

Warmer temperatures are in the forecast for the Prairies with Winnipeg set to warm up to -4 C next week.

How was your commute this morning? Blizzard warning remains in effect as #mbstorm wallops southern Manitoba https://t.co/uK4OiySPWw pic.twitter.com/fIKT2BaMor