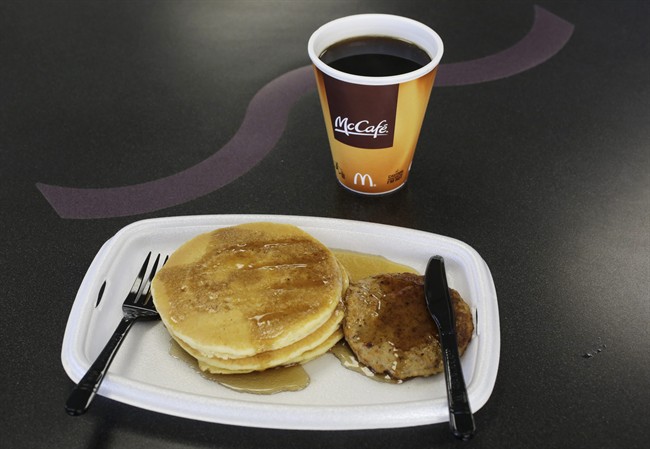 In this Feb. 14, 2013, photo, a McDonald’s breakfast is arranged for an illustration at a McDonald’s restaurant in New York. (THE CANADIAN PRESS/AP/Mark Lennihan, File)

WINNIPEG — Would you like a hash brown with that Big Mac?

McDonald’s has brought its all-day breakfast test to one of its Winnipeg restaurants.

The Grant Park location is now serving the chain’s breakfast foods around-the-clock, giving diners the chance to pair an Egg McMuffin with a McChicken… if you’re into that sort of thing.

McDonald’s announced earlier this week it would bring breakfast to 17 restaurants in B.C., Ontario and Quebec on a 24-hour basis.

The majority of restaurants stop serving breakfast at 11 a.m.

It’s unclear if McDonald’s plans to expand the test to other Manitoba locations.

McDonald’s launched all-day breakfast in the United States in the fall of 2015, and has since attributed the popularity of the morning food items for an increase in sales.