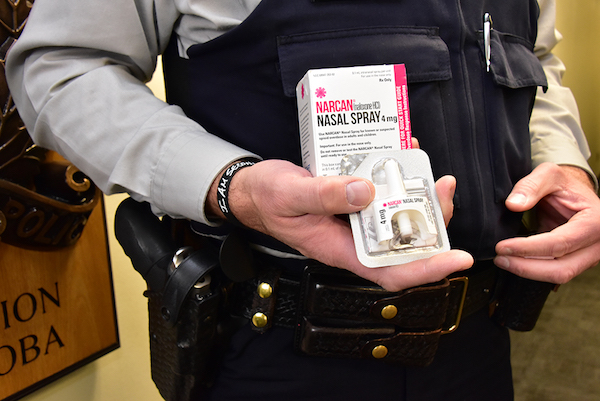 A Manitoba RCMP displays a naloxone kit, used by officers to save the life of a man suffering from a potential fentanyl overdose over the weekend. (RCMP / HANDOUT)

RCMP in Manitoba have administered the first dose of nasal naloxone on a man suffering from a possible fentanyl overdose.

Police were called to an area in southeast Manitoba at around 11 p.m. on Friday.

The 20-year-old victim was unconscious with a very low pulse and severe breathing difficulties.

An ambulance was still eight minutes away by the time police arrived, so officers administered two doses in recommended intervals.

The man’s breathing quickly stabilized and he was later released from hospital.

“There is no doubt in our minds that those officers saved the life of this young man,” said Supt. Joanne Keeping, East District Commander of the Manitoba RCMP.

“I cannot stress enough the value of having these kits with our officers, it saves lives and is critical to the safety of all first responders.”

RCMP began carrying naloxone kits in late November. Police agencies across the province followed in also carrying their own kits about one month later.