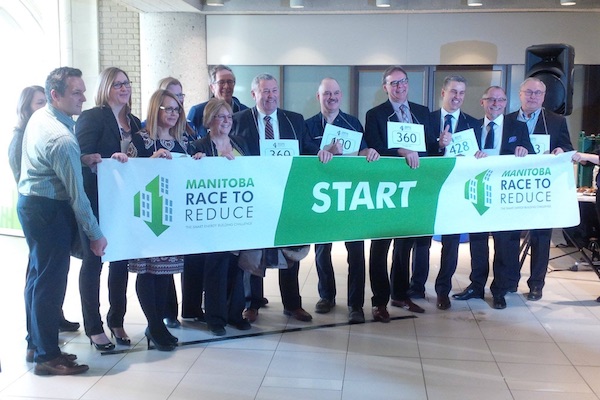 It’s not quite a race to the finish, but a group of Manitoba businesses are all striving to come out on top in the name of energy reduction.

The Manitoba Race to Reduce got underway Wednesday, made up of the owners and tenants in some of the largest commercial office spaces in the province.

The goal? To save 10 percent of their energy use.

“On any other day we are often in competition with each other for business and for tenants, but we’ve joined in an unprecedented collaboration to reduce energy use over the next four years,” said co-chair Frank Sherlock, executive vice-president of property management with Artis REIT.

“We know that we can accomplish a lot more together when we change our work habits, from even the smallest things, like turning off the lights when we leave, to using LED lighting.”

Johanna Hurme, incoming chair of the Winnipeg Chamber of Commerce, says if the participating buildings can meet their goal of 10 percent in energy savings by 2021, that would be the equivalent to taking 1,000 cars off the road for a year.

“We also know that Toronto building owners managed to reduce energy use by 12 percent in a similar competition, and wouldn’t it be great to challenge their record?”

Any commercial office building in Manitoba with 30,000 square feet or more is eligible to join the race.