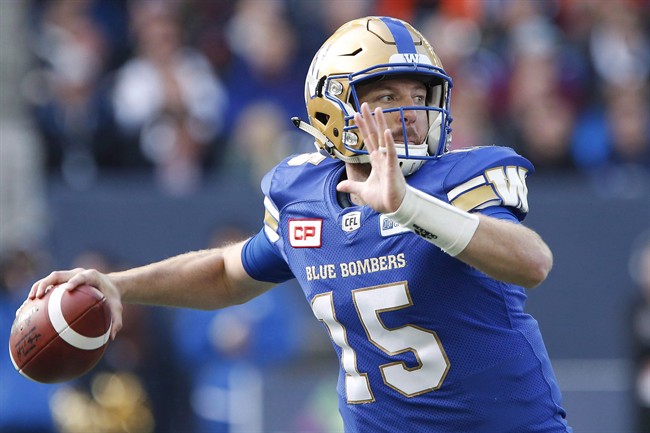 Winnipeg Blue Bombers quarterback Matt Nichols (15) throws against the B.C. Lions during the first half of CFL action in Winnipeg Saturday, October 8, 2016. (THE CANADIAN PRESS/John Woods)

The waiting game is over on whether the Winnipeg Blue Bombers would bring back quarterback Matt Nichols.

The football club has inked the veteran pivot through the 2019 season.

“We made it very clear heading into the offseason that getting Matt signed was a top priority for us,” said Blue Bombers general manager Kyle Walters.

“Obviously it was going to take some time on both sides, but we’re ecstatic as an organization to get this finalized today and continue building for 2017 and beyond.”

In early December, Walters said he was “cautiously optimistic” that Nichols would be brought back into the Bombers’ fold for another season, saying contract negotiations were moving “slowly” at the time.

Nichols got the starting job with the Blue and Gold during Week 6 of the 2016 season, helping guide the Bombers to a seven-game winning streak.

His 3,666 passing yards placed him fifth in the CFL despite starting only 13 regular season games, and he finished the season with four 300 yard passing games.

“I’m grateful for the opportunity that Kyle Walters and Coach (Mike) O’Shea gave me when they acquired me in 2015,” said Nichols. “That was the beginning of a fresh start for me, and I was able to get a full opportunity last season. I truly feel we are on the precipice of great things with this organization from top to bottom, and I’m appreciative that they feel I am the quarterback to lead them there.”