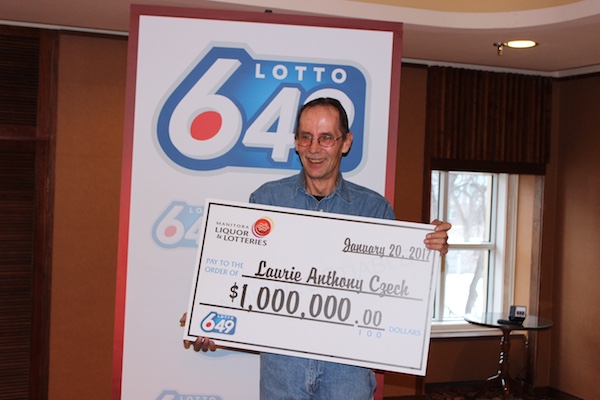 Laurie Czech of Brandon holds up a giant cheque for $1 million at the Fort Garry Hotel on Friday, January 20, 2017. (WCLC / HANDOUT)

WINNIPEG — A Brandon man is planning on hitting the links after winning $1 million.

Laurie Czech collected his cheque Friday in Winnipeg after winning the guaranteed prize on the January 4 Lotto 6/49 draw.

“But when the clerk scanned it, her eyes got wide, and she said, ‘You won a million dollars!’ I blurted out, ‘Bull—,’ I couldn’t help myself.”

Czech says he will use some of his winnings on a dream golfing vacation in Hawaii.

“I always got a kick out of that old Lotto 6/49 commercial with a bunch of friends golfing together after winning the lottery,” he said. “That’s going to be me and some of my golfing buddies.”

Before he boards his flight, Czech plans on upgrading his cell phone.

The winning ticket was purchased at the Mac’s Convenience Store at 855 1st Street in Brandon.