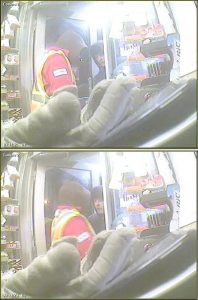 Police are looking for a man who attempted to rob a gas bar in the 1300 block of McPhillips Street while brandishing a knife on December 22, 2016. Click to enlarge. (WPS / HANDOUTS)

Winnipeg police are asking for tips from the public in identifying a man who attempted to rob a gas bar on December 22.

At around 7:45 a.m., the lone employee was confronted by a man brandishing a knife in the 1300 block of McPhillips Street.

He attempted to enter the building, but was unsuccessful and fled on foot.

He is described as a Caucasian man, approximately 50-years-old, 5’11” tall with a slim build and a short white beard.