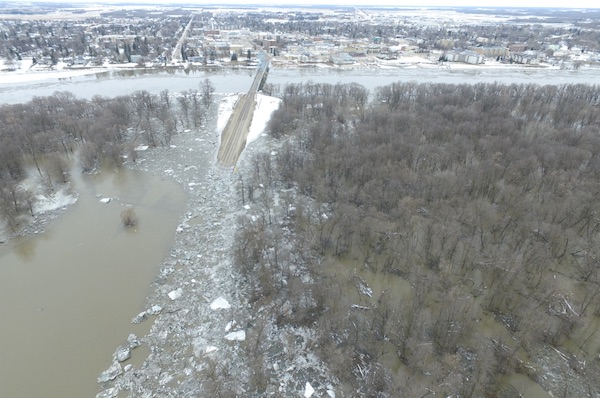 An aerial view of flooding in the Selkirk area on Sunday, March 20, 2016. (VIKTOR KOOS / FOR THE SELKIRK RECORD)

WINNIPEG – The Red River Basin Commission is warning Manitobans living along the Red River to prepare for a flood season.

Manitoba director Steve Strang says while there is a good possibility of flooding, it is hard to predict what level.

Strang explains that while heavy snowfall in the province so far this winter will play a small role, precipitation south and west of the Manitoba borders better indicates flood severity.

According to the Province of Manitoba, current data also supports a chance of moderate to major flooding in some locations.

The province says there are several other factors that contribute to spring flooding, some of which still need to see develop, including winter snow and rain; spring rain; and the depth of frost.

Rene Lagasse of St. Adolphe says that growing up situated along the Red River, preparing for a possible flood was a yearly routine.

“As soon as the water started coming up, sand bagging started, knowing the water was coming close to our house,” Lagasse says.

Today, Lagasse and his neighbours are protected from rising water by a dyke, but as an evacuee of the 1997 flood, he knows to always keep an eye on flood forecasts each year.

“We always think, what is gonna happen, and how high the water comes,” he says.