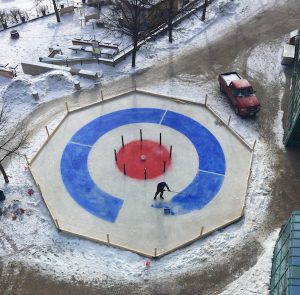 Crokicurl combines crokinole and curling. A newly-created rink for the game is opening at The Forks. (PUBLIC CITY ARCHITECTURE)

The octagon-shaped ice rink you’ve perhaps come across at The Forks this winter isn’t for frozen hand-to-hand combat, but rather for a new outdoor sport.

Crokicurl is the creation of Winnipeg-based architecture firm Public City Architecture. The sport combines crokinole and curling into one. 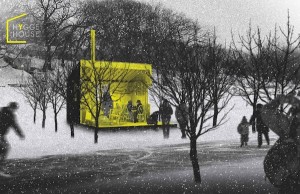 Hygge House, which has been a staple warming hut at The Forks since 2013, was also the vision of local firm Public City Architecture. (HANDOUT)

“We think it’s destined to be the next big thing. You can’t get much more Canadian (or Manitoban for that matter) than Crokicurl,” said principal architect Liz Wreford.

Wreford was also on the design team that created the fluorescent yellow warming hut Hygge House in 2013. That structure can still be seen at The Forks this season, joining new huts that will soon hit the ice later this week.

Crokicurl consists of two teams, each having 1-2 players. The object of the game is to accumulate the most points through shooting the rock into the centre button and positioning the rocks on the playing surface so they remain within the highest scoring circle at the end of the round. Rocks are available to be borrowed from The Common beverage and food area inside the market.

The Crokicurl rink will open to the public on Friday.