‘Dine About Winnipeg’ a Chance to Sample City’s Best Restaurants 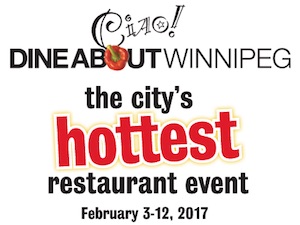 Winnipeg is known nationally for having one of the best and diverse food scenes in Canada, and the city’s top chefs are out to prove exactly that.

More than 10,000 diners are expected to flock to the 11-day culinary event.

“Dine About Winnipeg is an event that continues to generate excitement about eating out. People love to visit new restaurants, try new dishes and support the local food industry while they’re at it,” said Laurie Hughes, publisher of Ciao!.

“We have incredible culinary talent in the city and our chefs really shine, especially during Dine About Winnipeg.”

Organizers say the event is a chance for diners to sample an array of restaurants with a variety of menus, while also boosting business for eateries during a traditionally slow time of year.

Some of the many restaurants participating include Prairie 360, Fusion Grill, Blind Tiger, La Roca, Pasquale’s, and Lovey’s BBQ. For a complete list of restaurants and to see the menus, visit ciaowinnipeg.com/dine-about-2017.