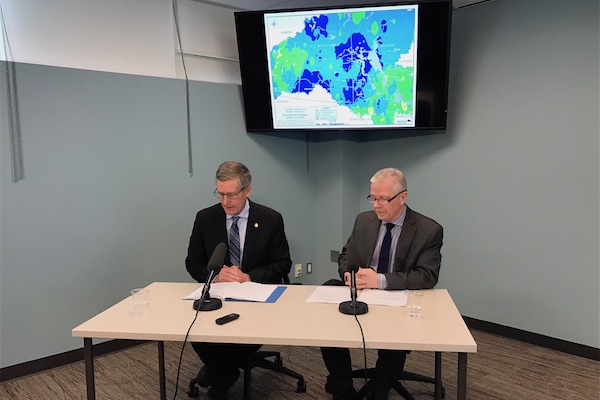 WINNIPEG – Manitobans are being warned that major flooding is possible in much of the province this spring.

Forecasters say a combination of high soil moisture levels and lots of snow could cause moderate to major flooding.

Infrastructure Minister Blaine Pedersen said the severity of any flooding will partly depend on how much rain and snow falls in the coming months, as well as the timing and rate of the spring thaw.

“We have experienced some unusual winter weather to this point that has contributed to an expanded risk of overland flooding,” Pedersen said Monday.

Areas at risk of major flooding include the Red, Souris, Pembina, Lower Assiniboine and Roseau river basins and the southwest region of the province.

The Upper Assiniboine River, the Winnipeg River, the eastern region, northern Manitoba and The Pas regions — including the Saskatchewan, Carrot and Swan rivers — are at risk of moderate to major flooding.

Pedersen said it is early yet, but the government is planning for the highest potential flood risk and plans to release a full updated forecast next month.

He said Winnipeg and the Red River Valley are well protected. The government is reviewing emergency response plans and sharing information with municipalities.

“We are being proactive in terms of our planning,” he said.

“The department is up and running and drawing on the experience that they have had in past years and lessons learned from the past.”

Parts of Manitoba were hit by major floods in 2014 and 2011 that caused extensive damage and forced some people from their homes.

In 2014, the province declared a state of emergency and called on the military to help with sandbagging when floodwater poured into the Assiniboine River.

The study by engineering firm KGS Group said defences along the Assiniboine River between Portage la Prairie and Winnipeg are particularly weak.

“The flood of 2011 highlighted several potential weak links in the existing flood-control systems. The shortcomings of the system were emphasized again in 2014,” said the study.

The study said the Portage diversion — a channel that moves water from the river to Lake Manitoba — and dikes along the riverbank needed upgrading.

Last January, the Progressive Conservatives, who were then in Opposition, accused the NDP government of ignoring flood infrastructure along the Assiniboine River for years.

— By John Cotter in Edmonton