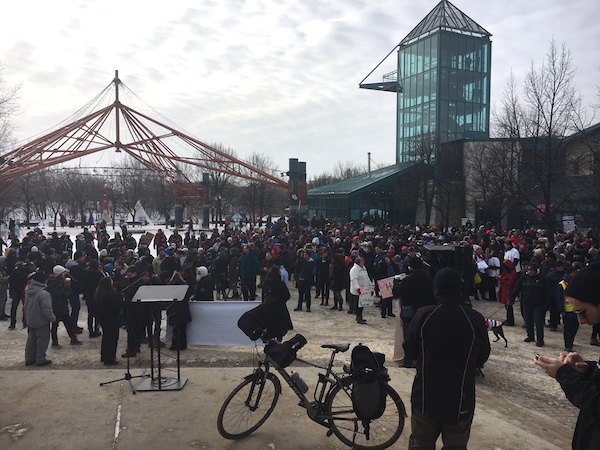 Winnipeggers showed up to The Forks to walk for human rights on Saturday, February 4, 2017. (MICHELLE BAILEY) 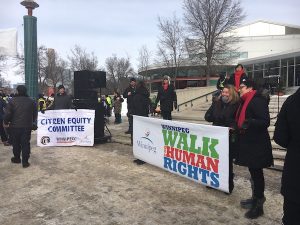 WINNIPEG — It was a Winnipeg winter love-in at The Forks Saturday as hundreds of people stood side-by-side to oppose hate and embrace love and acceptance at the first ever Walk for Human Rights event.

Event emcee, local radio host Ace Burpee, got things started by asking everyone to turn to those standing around them to say “hello, even give a hug or a handshake.” And people enthusiastically did.

One of Winnipeg’s cherished musical talents, Maria Aragon, led everyone in the singing of “O Canada,” and walk participants chimed in with passion.

Elder Norman Meade was one of several speakers to say a few words before the walk began, saying “the spirit is so strong here today. Welcome to Winnipeg where the spirit rests. Love is the most important thing, and take it to every person you meet.”

Meade was joined by officials including Manitoba Premier Brian Pallister, St. Boniface MP Dan Vandal, and Mayor Brian Bowman. Bowman came up with the idea of having the walk to show solidarity for the victims of the shootings in a Quebec City mosque last Sunday.

It was also an opportunity for him to issue a request to those gathered to use social media to spread the message that hate and oppression is not cool.

“When we all leave here today, my simple request of you is to denounce hate,” Bowman said. “We need to call it out when it occurs and do it in a non-violent way.”

The mayor also asked the crowd to start using the social media hashtag #MakeItAwkward which was launched by Edmonton Mayor Don Iveson.

“If you are at a party, or a dining room table and someone makes one of ‘those’ jokes or comments that are not appropriate in the day and age, call them on it. Make it awkward,” he said to cheers.

Premier Pallister said “when we stand together to say we are tolerant of others, we strike a match for freedom.”

After the official portion of the event came to an end, inspired participants walked to the Canadian Museum for Human Rights and circled back to The Forks. The museum then threw open its doors for the day offering free admission.