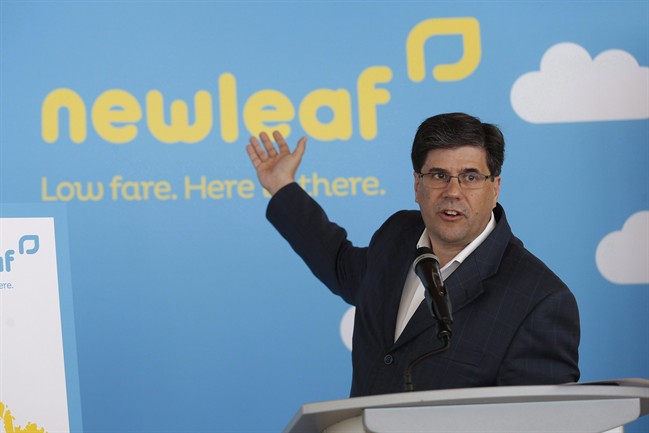 Jim Young, President and CEO of NewLeaf Travel, speaks to media at a press conference at the James Armstrong Richardson International Airport in Winnipeg, Thursday, June 23, 2016. (THE CANADIAN PRESS/John Woods)

Winnipeg-based NewLeaf Travel Company is the subject of a travel alert from the Consumers’ Association of Canada.

“Canadians have recently been forced to deal with arbitrary cancellations and alterations to flight dates and times on thousands of tickets purchased from NewLeaf Travel Company Inc.,” the association said on its website Monday.

NewLeaf has faced sharp consumer criticism ever since it began operating last summer after a delayed launch due to a regulatory snafu with the federal government.

In January, it cancelled regular air service to Arizona and Melbourne, Florida and issued customers refunds.

The CAOC statement continues, “On flights operated by Flair Airlines Inc. It is extremely important that prospective buyers of NewLeaf tickets have an alternative plan to reach their chosen destinations and return home on time.”

“Buyers of NewLeaf tickets should be asking themselves the question “Does the saving of buying cheap tickets warrant the risk of being stranded.”

Julie Rempel, director of communications and marketing for NewLeaf, said partly in a statement, “It is unclear why an organization, who again has never contacted NewLeaf to gain an understanding of the facts would choose and try to damage our reputation.”

“As you recall, in early January NewLeaf Travel Company had to make the unfortunate decision to cancel service to Mesa Phoenix and Melbourne Florida. This resulted in the full and complete refund of those tickets purchased.”

NewLeaf says it has transported more than 150,000 passengers in its six months of operation.