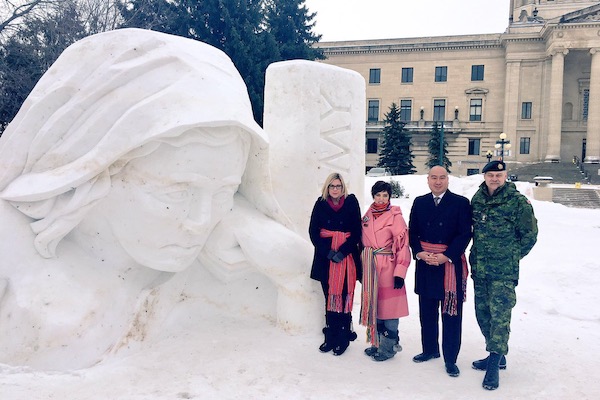 A snow sculpture paying tribute to the Battle of Vimy Ridge was unveiled at the Manitoba legislature on Monday, February 13, 2017. (@MIN_SQUIRES / TWITTER)

A snow sculpture unveiled Monday at the Manitoba legislative pays special tribute to the 100th anniversary of the Battle of Vimy Ridge.

The sculpture is a replica of Canada Bereft, a monument at the Canadian National Vimy Memorial in France and was crafted by sculptor David Macnair.

“It is truly fitting that this year’s sculpture celebrates the heroic efforts of Canadian soldiers given that this year’s festival theme is Hé Ho Heroes. Hé Ho is the festival’s rallying cry as we celebrate our proud ancestors and heroes of yesterday and today.”