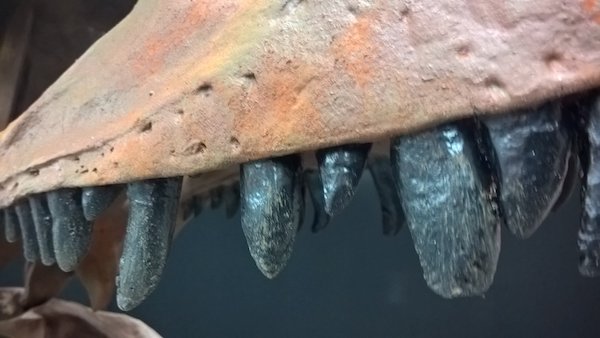 A close-up on the teeth of the secret dinosaur to be unveiled at the Canadian Fossil Discovery Centre on Friday. (CFDC / HANDOUT)

After nearly a year of planning, a theropod dinosaur skeleton is almost ready for its unveil at the Canadian Fossil Discovery Centre in Morden.

The 22-feet long centrepiece, which officials are keeping secret until Friday, is one of many new dinosaurs being added to the museum this weekend.

“The addition of this new dinosaur feature will dramatically enhance the CFDC’s collection and the visitor experience,” said executive director Peter Cantelon.

“Over the years we have had many people confused about the differences between dinosaurs and marine reptiles and now visitors will have the chance to see them both together in the same room, bigger than life.”

The display will take up the entire south end of Mosasaur Hall and include a 30×10 foot backdrop that depicts a Jurassic-era dinosaur environment. It will also teach visitors the similarities and differences between dinosaurs and marine reptiles

An official opening of the exhibit is scheduled at 2 p.m. on February 17.