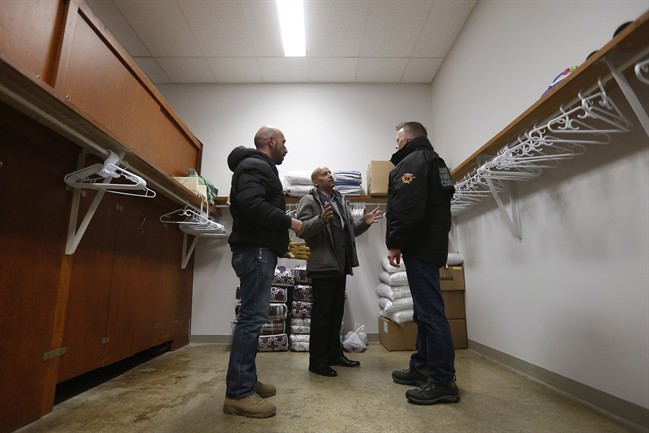 From left, Fadel Alshawwa, Jean Pierre Venegas, Manager of the Manitoba Interfaith Immigration Council, and Bill Spanjer, Municipal Emergency Coordinator for Emerson-Franklin bring blankets and pillows into a community hall for refugees that may walk across the border in Emerson, Man. Thursday, February 9, 2016. Refugees have been crossing into Canada at Emerson and authorities had a town hall meeting in Emerson to discuss their options. (THE CANADIAN PRESS/John Woods)

WINNIPEG — A centre that assists in settling refugees once they first arrive in Canada is in desperate need of donations.

Welcome Place has been bursting ever since an influx of asylum seekers made their way across the Canadian border in recent weeks near Emerson, Manitoba. Twenty-one people were arrested by RCMP over the weekend and made refugee claims at the Canada Border Services Agency office. Seven more people crossed into the province within two groups overnight Sunday into Monday. So far this year, 69 people have illegally crossed.

The Winnipeg Foundation has offered up a much-needed donation of $33,000 to the centre, $23,000 of which came from an anonymous donor.

Chahal says they normally see 60 to 70 refugee claimants annually. Since April 2016, they have received 300.

“We are in need of additional resources to help the refugee claimants to navigate the social and legal systems as they prepare for their claim hearing.”

Additional donations can be made on the Manitoba Interfaith Immigration Council website.