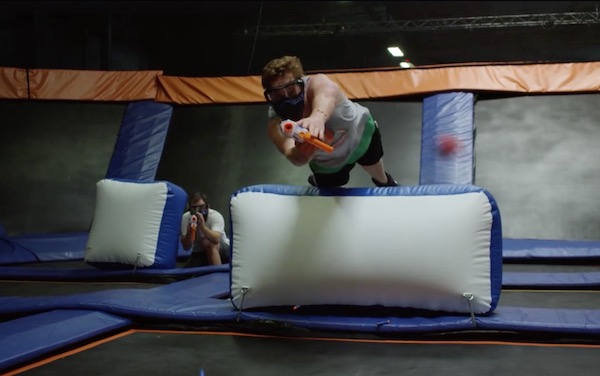 There’s only so many ways you can improve the amount of fun you have with a Nerf blaster.

Sky Zone, an indoor trampoline park in south Winnipeg, is putting a new spin on the toy with a new attraction opening today.

Sky Wars is a pilot project where guests aged eight and up can shoot Nerf bullets while flying and flipping through the air.

“Sky Wars combines competition, team strategy and all out fun in a unique playing field that allows you to soar through the air and bounce off the walls while blasting away at your opponents,” explained Sky Zone Winnipeg CEO Arnold Cohn.

The facility opened in 2013 and has since expanded its programming outside of traditional trampoline fun. Fitness classics, dodgeball, sensory hours and toddler time are also available.

A video previewing Sky Wars on the park’s Facebook page has racked up more than 29,000 views.

“We are very excited about the opportunity to bring something completely revolutionary to the prairies,” added Sky Zone general manager Eku Malcolm.

Sky Wars games will run Tuesday and Thursday nights from 7-9 p.m. and Sundays from 5-8 p.m. Games are open to the public on a first-come, first-served basis.