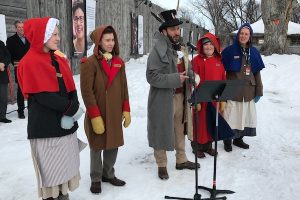 The Perron-Beaudry family is this year’s official family of Festival du Voyageur. (CHRISD.CA)

WINNIPEG — This year’s theme of Festival du Voyageur is HéHo Heroes, but the only hero will be Mother Nature if the snow sculptures inside Voyageur Park can withstand the next 10 days.

As part of the Festival’s annual international snow sculpting symposium, artists from across the globe are in Winnipeg this week carving their snowy masterpieces. Teams began their work on Wednesday and will aim to finish by Saturday. From there, the sculptures will be on full display for the thousands expected to attend beginning this weekend.

“We’re always hoping that the sculptures are going to make it through the mild weather,” said Dominique Leclerc, director of marketing and communications. “They’re very large and they look pretty stable, so let’s hope for the best.”

Above freezing temperatures will be normal for the next week, including a balmy late winter high of 5°C on Friday.

While the sunshine and near T-shirt temps may prove too much for the snow, it does wonders for the event’s attendance. Louis Riel Day on Monday is typically the busiest day of the western Canada’s largest winter festival. With a full day of activities planned to honour Manitoba’s founding father, there won’t be a better place to be during the provincial holiday.

Festival du Voyageur runs February 17-26. Opening night festivities include the torch light walk from the Canadian Museum for Human Rights lit by hundreds of candles and torch lights beginning at 6:30 p.m. It will end at Voyageur Park for the official opening ceremonies at 7:30 p.m. with fireworks and a special tribute to the large oak tree of Voyageur Park, which will find new life as a sculpture following the festival. This Friday, Voyageur Park will be open to the public from 5 p.m. to midnight.

Day admission is $20 (adults), $10 (youth five to 17) and free for children under four. A 10-day pass will run you $34 for adults and $13 for youth. Passes can be purchased at any local Safeway and Sobeys location, at the Festival office, 233 Provencher Boulevard, online, or at the gate.