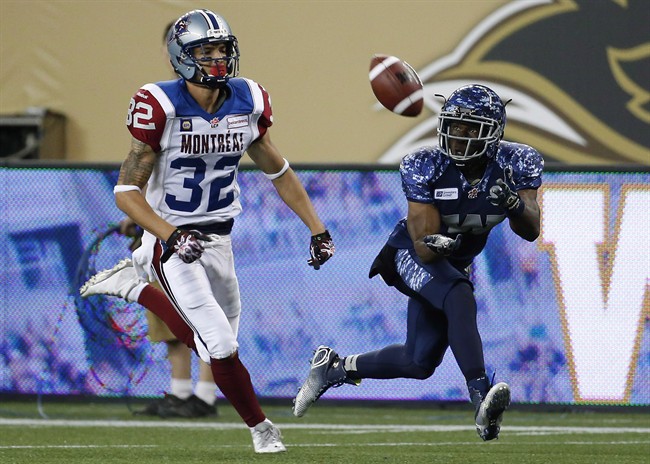 Winnipeg Blue Bombers’ Clarence Denmark (89) snags a pass in front of Montreal Alouettes’ Mitchell White (32) during the second half of CFL action in Winnipeg Friday, August 22, 2014. (THE CANADIAN PRESS/John Woods)

The Winnipeg Blue Bombers have agreed to terms with veteran receiver Clarence Denmark.

Denmark returns for a seventh season with Winnipeg, taking in 359 receptions for 4,870 yards and 24 touchdowns in 98 career regular season games.

“There are certain players you simply have to figure out a way to make it work contractually. Clarence is one of those players,” said Blue Bombers general manager Kyle Walters.

Denmark played in 10 games last season after returning to Winnipeg in late July. He recorded 53 receptions for 705 yards and eight touchdowns, including a career-high seven receptions for 195 yards and two touchdowns in a 34-17 win at Toronto in August.

Denmark returned to Winnipeg in late July last season, playing in 10 games and recording 53 receptions for 705 yards and eight touchdowns.