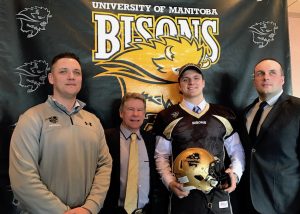 WINNIPEG — Cole Adamson visited four universities before deciding to stay in Winnipeg and call the University of Manitoba home.

The newly-recruited student-athlete is the Manitoba Bisons latest defensive tackle to suit up in the brown and gold.

The 6’5″, 265 lbs. defensive tackle recorded 54 tackles, nine sacks, two forced fumbles, one fumble recovery and one blocked kick on defence in 2016, punting for an average of 37 yards.

“I’m excited to take the next step in my athletic and academic career,” Adamson said. “There is nothing better than to be able to do it where it all started with my family and friends supporting me.”