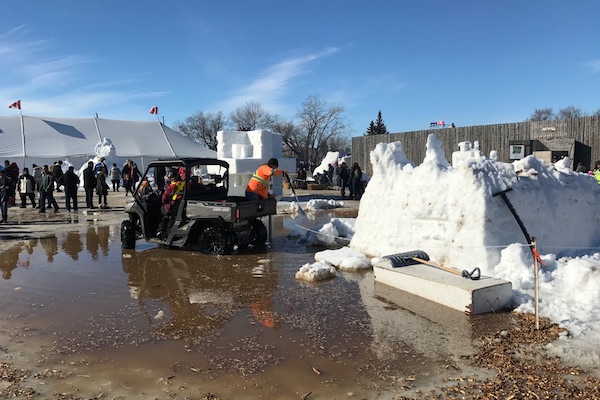 WINNIPEG — The second weekend of Festival du Voyageur gets underway tonight, which promises to be cooler weather-wise than the slush and mud that greeted visitors during the first week of events.

“Festival du Voyageur would like to reassure festivalgoers that we are doing everything we can to ensure that our festival grounds are safe”, said executive director Ginette Lavack Walters.

A handful of visitors slipped on the melting ice during opening weekend, while others complained of muddy conditions throughout the park.

“With the cold weather coming back, Voyageur Park may be a bit icy. Our park crew is adding woodchips and sand to create safer passageways for our visitors. We also ask that festivalgoers use caution when walking on the festival grounds.”

Staff is asking for patience as they manage and control traffic flows in and out of the park. Some festival-goers who purchased 10-day passes weren’t allowed entry last week due to capacity, creating a backlash on social media.