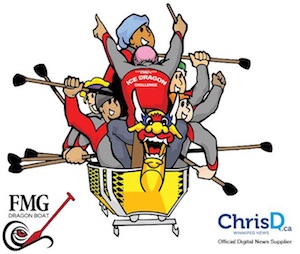 WINNIPEG — Last week’s mild spell has moved the planned FMG Ice Dragon Challenge off the river trail at The Forks.

Unsafe river conditions prompted The Forks to close the trail last weekend. If temperatures should dip for long enough, there’s a chance the trail could be reopened again before being officially closed for the season.

The dragon boat races on ice raise funds for CancerCare Manitoba Foundation and the Children’s Hospital Foundation of Manitoba.

A new date has been scheduled for March 11.

“We are optimist that with the cold weather forecast for next week, we may be able to re-establish the port area,” said Kerry LeBlanc, operations manager of The Forks. “Testing of the Ice and monitoring of the surface water will be done daily to confirm our optimist outlook.”

All practice, race heat times and arrangements will remain the same for the new date.

ChrisD.ca is also a sponsor of the FMG Manitoba Dragon Boat Festival, happening September 8-10 at The Forks.