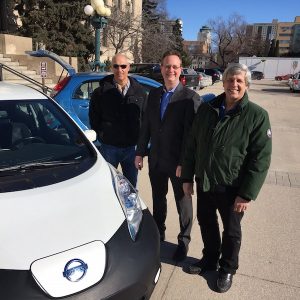 WINNIPEG — Manitoba’s NDP wants the province to use new carbon tax revenues to put more electric buses and cars on the roads.

NDP MLA Rob Altemeyer, critic for the environment and green jobs, says owners of such vehicles would see savings over the long run after their initial upfront investment.

“Improving public transit has to be a key part of any made-in-Manitoba climate strategy, where transportation is our largest source of emissions,” said Altemeyer.

“The cheaper operating costs of electric buses mean savings that can be used to improve transit services and reduce fares, rather than service cuts and higher fares.”

Four of Winnipeg’s 585 buses are of the electric variety.

“My energy costs to drive year-round are less than $100 and my electric vehicle has no engine or transmission to maintain or fix,” said Ross Redman, a member of the Manitoba Electric Vehicle Association (MEVA). “And yes, that includes winter driving in Winnipeg.”