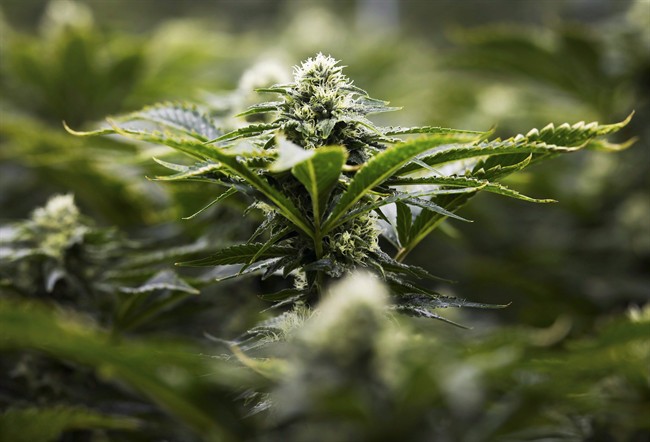 Marijuana is photographed at the growing facility in Markham, Ont., on Thursday, January 7, 2016. The number of Canadians registered to purchase medical marijuana from licensed producers has exploded since the federal commercial-access program was introduced almost four years ago. (THE CANADIAN PRESS/Nathan Denette)

TORONTO – The number of Canadians registered to purchase medical marijuana from licensed producers has exploded since the federal commercial-access program was introduced almost four years ago, reaching nearly 130,000 by the end of last year, the most recent Heath Canada figures show.

But the surge in demand has many wondering if all these patients have a legitimate medical need for the drug. Or are some people using the system to acquire recreational pot before it is legalized, as the Liberal government has promised to do this spring?

Dr. John Goodhew, a family practitioner in downtown Toronto who supports the use of therapeutic cannabis for specific conditions, said he’s seen a definite uptick in patients seeking prescriptions.

Because Goodhew has become known as one of a minority of doctors who will prescribe medical marijuana, he has patients from all over Ontario contacting him.

“So patients will frequently call me and I’m not able to help them because I only consider marijuana as a therapeutic agent for people in my practice, people that I know, people whose medical histories I’m familiar with,” he said Thursday.

“And this is really the only responsible way to do it. Unfortunately it leaves other people kind of in the lurch.”

Goodhew said he prescribes cannabis for such ailments as pain, weight loss from conditions like inflammatory bowel disease, nausea and hepatitis C.

But increasingly patients are asking for it because of osteoarthritis, a painful condition that’s on the rise as the population ages.

“Things like anxiety and depression where there really isn’t good data that it works … I won’t prescribe it,” he said.

“And other people will come in and just ask (for a prescription) and I’ll say ‘What is the medical condition?’ and they’ll say ‘Can’t you just make something up?’ And I’m like, ‘No, it doesn’t work that way.'”

Goodhew attributes such behaviour to the “Trudeau effect,” a slackening of concern as people anticipate that Ottawa will soon decriminalize recreational marijuana. But he acknowledges it can be difficult for physicians to determine which patients have a genuine need for the drug and which ones want it just to get high.

“Because part of pain relief is if it relieves pain and it also makes you feel good, it’s kind of a mixed blessing that way.”

Dr. Jeff Blackmer, vice-president of medical professionalism for the Canadian Medical Association, said the spike in the number of people registered to purchase medical cannabis could be a reflection of doctors becoming more comfortable with prescribing the drug, coupled with growing patient demand.

And he agreed that while some people seek a prescription for authentic health reasons, others likely simply want it for its euphoric effects.

“When I talk to doctors about this, there’s no question people will say, ‘Some of my patients I feel really would not be here asking for it if they did not have these medical conditions,'” he said from Ottawa.

“But I also hear from colleagues that they do suspect some of the patients are there asking for the approval to use it recreationally,” said Blackmer, adding there’s no standard test “to tease that out.”

While doctors aren’t prohibited from prescribing cannabis, the CMA opposes its use medicinally because of a lack of scientific evidence proving the drug is effective in treating specific conditions.

Dr. Mark Ware, a pain specialist and medical cannabis researcher at McGill University in Montreal, said there are several pharmaceutical cannabinoids approved for use in Canada, including a spray containing a cannabis extract used to treat pain and spasticity due to multiple sclerosis or for advanced cancer pain.

But herbal cannabis in the form of dried flowers or oils is not “approved” as medicine in Canada. But they are legal under federal Access to Cannabis for Medical Purposes Regulations, he said, noting that the best available clinical trials support their use for pain caused by nerve damage, after standard treatments have failed.

“There is a very long list of conditions for which people have claimed benefit from cannabis use,” Ware said by email. “Most of these conditions have not been formally studied in clinical trials, but intriguingly, for many such ‘claims,’ there is a body of scientific literature that provides a rationale for why cannabis might work for those conditions.”

Some of those trials are either planned or underway in Canada and elsewhere.

In the meantime, Blackmer said doctors are waiting to see if and when Prime Minister Justin Trudeau’s government will legalize and regulate the sale of recreational pot.

“We would like to see just one system,” he said. “So if marijuana is legalized for recreational use, we feel very strongly that that makes the ‘question’ around use of medical marijuana essentially moot, because it would be something that’s available to everyone for any reason, and you wouldn’t need to go through physicians and you wouldn’t need to get special dispensation.”

Goodhew is anxious for that day.

“I’m supportive of the role that marijuana has in medicine. But I’m really tired of being the gatekeeper for it. And all my colleagues are,” he said.

“Not only are we the gatekeepers and have to fill out forms constantly for people with legitimate use, we’re now getting inundated with people who want a prescription so they can get the good-quality stuff at a decent price from the licensed growers … (and) we’re constantly having to turn people down.

“So the day that it becomes legal will be a day when we’re all going to breathe a sigh of relief.”