Skating Trail at The Forks Reopens After Mild Spell 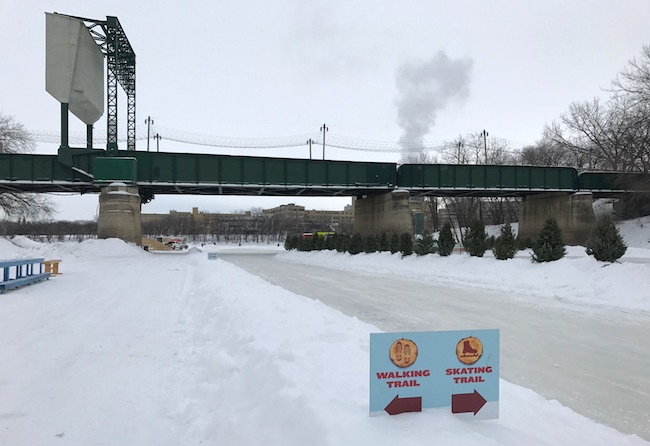 A portion of the Red River Mutual Trail at The Forks has reopened after temperatures dropped this week. (CHRISD.CA FILE)

UPDATE: Due to the province’s warning, the trail has since been closed again.

WINNIPEG — A bonus run of the Red River Mutual Trail is back for another blast of winter at The Forks.

After closing last week amid unseasonably warm temperatures, crews have been able to groom the trail again as cooler weather has returned the last few days.

Paul Jordan, CEO of The Forks North Portage, says they heard from the public asking them to bring the trail back.

“We have no idea how long we’re going to be able to keep the trail open this time but we’re considering this a bonus to our winter season so encourage everyone who thought they missed it to get out and enjoy this weekend and hopefully beyond,” Jordan said.

Approximately one-kilometre of skating trail is open from The Forks Historic Port to the Norwood Bridge, including the walking path. The portion of trail that extended onto the Assiniboine River remains closed for the season, as well as on-land trails, other rinks, and snowboarding and toboggan runs.

The canopy rink has also been groomed again and is ready for skaters.

The Crokicurl rink is expected to reopen next week.

← Previous: We Can Be Like Buffett: Jackman-Atkinson Next: Province Warns to Stay Off Red River as Ice Weakens →
Tags: The Forks | Weather | Winnipeg | Winter