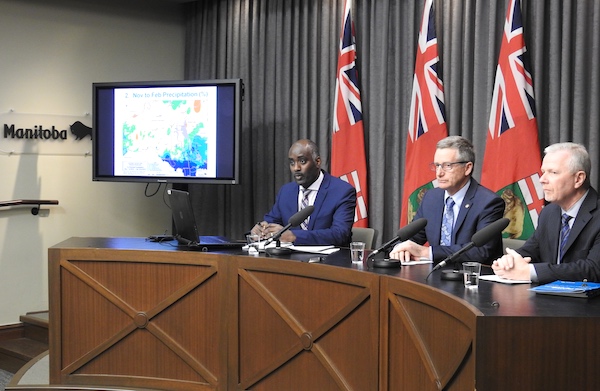 WINNIPEG – There is a significant risk of flooding in southern Manitoba this spring, although the rising water may only cover some farmland and spare major roads and communities, the provincial government said Monday.

Soil moisture remains very high following a wet fall, and river and lake levels are above normal in some areas, the government said in its first flood outlook of the year.

On the plus side, two recent mild spells have melted a lot of snow upstream, leaving less to come in the spring.

“Our information suggests much of the snow … south of Grand Forks, North Dakota is now gone.”

Spring flooding has become almost an annual event in Manitoba, where meltwater rushes in from as far away as South Dakota and the Rockies. In many years, some farmland is underwater briefly while towns and cities remain dry.

In bad years — when a rapid snow melt occurs simultaneously with heavy rain on ground that is already saturated — some roads are unpassable, lakeside homes risk being swamped and communities close off dikes or build up walls of sandbags to protect residents.

The government stressed Monday that everything will depend on the weather in the coming weeks. But with average conditions, major roads such as Highway 75 — the main link between Winnipeg and the United States — should remain dry. In 2011, a particularly bad year, the highway was closed for 28 days.

The outlook issued Monday said there is a risk that some areas along the Red, Souris, Pembina, Roseau and Lower Assiniboine rivers will see flooding, but little chance of the type of flooding seen in 2011. That spring, hundreds of Brandon residents were evacuated from a low-lying neighbourhood as a precaution and hundreds of soldiers were brought in to help shore up dikes downstream.

Over the decades, Manitoba has built up a complex system of defences to keep the water away from developed areas as it makes its way into Lake Winnipeg and Hudson Bay.

Winnipeg is protected by a floodway that diverts the rising Red around the east side of the city. Smaller communities such as Morris along the Red River have dikes that can be completely closed off, leaving the community an island surrounded by the swollen river.

An updated flood outlook will be issued in late March, the government said.