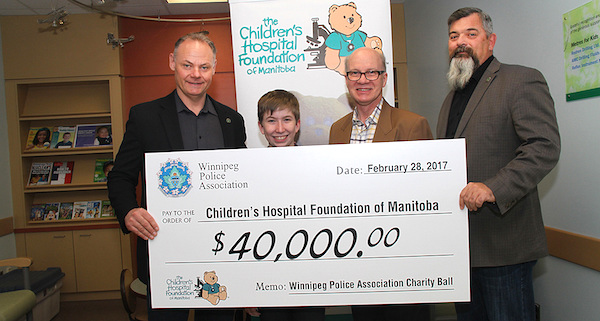 The Winnipeg Police Association presents a cheque for $40,000 to the Children’s Hospital Foundation of Manitoba on Tuesday, February 28, 2017. (WPA / HANDOUT)

The Winnipeg Police Association has donated $40,000 to the Children’s Hospital Foundation of Manitoba.

The donation comes out of proceeds from the 2016 WPA Charity Ball, which has raised more than $546,000 towards children’s health to date.

“We are grateful for the support from the members of the Winnipeg Police Association,” said Lawrence Prout, Foundation president and CEO.

“They are part of the reason why our Champion Child, Logan Quatember, is with us today. Not only where they there the night of Logan’s car crash, but because of their generous financial support, Logan received the specialized equipment that aided in his recovery.”