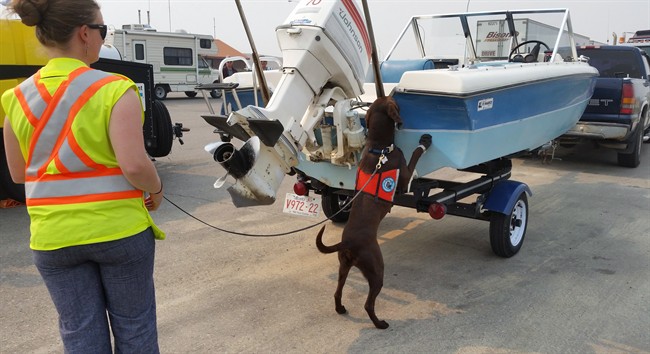 Diesel and handler Heather McCubbin inspect a boat in this undated handout image. Sniffer dogs, DNA analysis and drones are among novel new techniques being used to detect invasive species in Canada. (THE CANADIAN PRESS/HO-Alberta Environment and Parks)

The Manitoba government has launched a new public awareness campaign to help in stopping the spread of zebra mussels throughout the province.

“Spot the Stripes and Stop the Spread” will encourage water-users to help in the fight against zebra mussels and other aquatic invasive species (AIS).

The campaign is focusing on all recreation activities involving water, with materials distributed to approximately 750 vendors across the province who sell fishing and wildlife licences in helping stop the spread of AIS.

The campaign launches as the Mid-Canada Boat Show gets underway this weekend at the RBC Convention Centre.

“The Mid-Canada Marine and Powersports Dealers Association (MMPDA) is committed to working with our members and the province to stop the spread of AIS,” said Geoff Powell, association manager, MMPDA. “The spread of zebra mussels in our lakes is a very serious concern for our industry and we believe our customers want to help.”

The province will once again have decontamination units at high traffic locations for boaters this summer and watercraft inspection staff to help the public stop the spread of AIS such as zebra mussels.