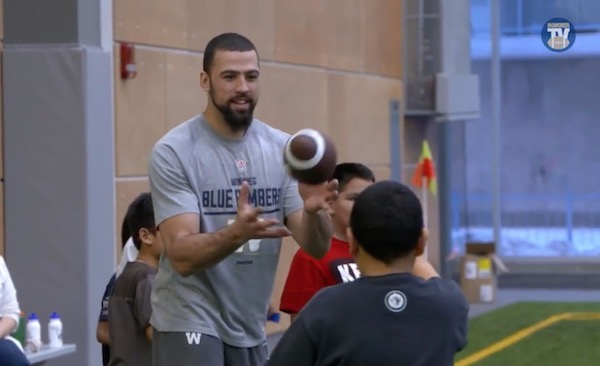 The Winnipeg Police Association has signed on as a partner of the Winnipeg Youth Football Club.

The weekly after-school flag football program for inner-city youth is run by the Winnipeg Blue Bombers as part of their Blue Bomber Futures initiative.

“Both the Winnipeg Police Association and the Winnipeg Blue Bombers have long, successful histories of supporting youth in the community,” said Maurice Sabourin, president of the WPA.

“The WPA is proud to be the presenting sponsor of the Winnipeg Youth Football Club and we look forward to continuing to connect and work with inner-city youth.”

Each week, more than 200 youth from 12 different schools and organizations in Winnipeg’s central area receive free certified flag football coaching for 90 minutes, dinner, T-shirts, and school bus transportation to and from the club, which takes place at the University of Winnipeg Axworthy Health and Recplex.

Former Winnipeg Blue Bombers and current Winnipeg police officers, Shawn Gallant and Errol Brown, as well as former CIS and Junior football players will be assisting with the camps, passing on their knowledge of football and life to participating youth.