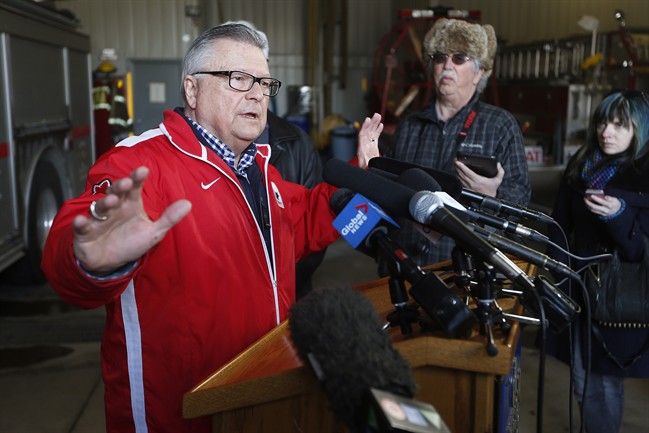 Ralph Goodale, Minister of Public Safety and Emergency Preparedness, speaks to media after a visit with officials at the fire hall in Emerson, Manitoba, Saturday, March 4, 2017. (THE CANADIAN PRESS/John Woods)

EMERSON, Man. – The federal government is enforcing border laws and is willing to put more resources in place to deal with the influx of asylum-seekers from the United States, federal Public Safety Minister Ralph Goodale said Saturday.

Goodale thanked local politicians and responders as he visited Emerson, Man. — a small border community that has seen some 200 illicit border crossings so far this year.

“We all need to work together. We have to have good communication with one another. This is a set of issues that span national, provincial and local responsibilities,” Goodale told reporters.

“The key thing is to make sure that our agencies on the ground … have the resources necessary to do the job. At the moment, they are properly resourced, but we are monitoring that very carefully as we go forward.”

Goodale announced $30,000 to cover extra costs borne by Emerson-Franklin’s volunteer fire department and other agencies in the community so far, and said more will be available. The RCMP and the Canada Border Services Agency have shifted some resources in southern Manitoba so that more staff are in the Emerson area. The CBSA recently set up a trailer to help process the border-crossers.

The number of illicit border-crossings has jumped in recent months, following the U.S. government’s plans to limit immigration and step up deportations. The Manitoba government has said the influx has created more demand for housing and other support services.

The migrants have been crossing through fields and ditches because, under the Canada-United States Safe Third Country Agreement, they are turned back at official border crossings if they have already made a refugee claims in the U.S.

If they get onto Canadian soil before being apprehended, they are allowed to stay in Canada and go through the normal refugee-claim process.

Conservative immigration critic Michelle Rempel has called on the government to ensure migrants who sneak across the border are charged with crossing illegally, but Goodale said they cannot be charged if they make a refugee claim, at least until the claim is dealt with.

“Charges in relation to the crossing of the border cannot be laid until after the case of the particular individual under immigration rules has been finally disposed of,” Goodale said.

He also said the government is examining requests for more aid from refugee support agencies, but did not provide any specifics.

Greg Janzen, the reeve of Emerson-Franklin, said he has been very happy with the response so far from the federal and Manitoba governments.

“The support and communication has been almost overwhelming in a way,” Janzen said. “Right now (Goodale) has committed to the $30,000, which is going to help a lot and there is no cap on it … so in good faith, I’m confident our costs will be covered.”