‘High Impact’ Winter Storm on the Way for Manitoba 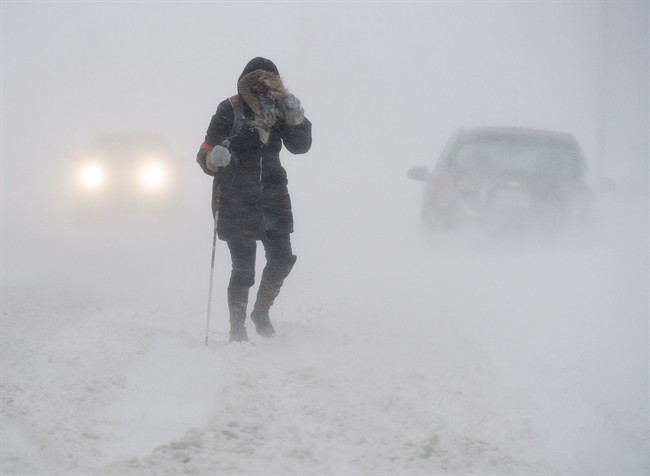 A pedestrian walks down Brunswick Street near Citadel Hill in Halifax as a major winter storm blasts the Maritimes on Monday, Feb. 13, 2017. Winnipeg and much of the province is under a special weather statement as a winter storm system develops. (THE CANADIAN PRESS/Andrew Vaughan)

WINNIPEG — March looks to be coming in like a lion with a major winter storm on the way this week.

Environment Canada has issued a special weather statement for southeast Saskatchewan and western Manitoba as a storm system develops Monday night into Tuesday.

“This system is forecast to bring a widespread area of heavy snow from southeast Saskatchewan across western Manitoba and Interlake regions into central and northern Manitoba,” the statement says.

“Further east, precipitation will likely begin as rain or freezing rain over the Red River valley and east of Lake Winnipeg Monday morning before changing over to snow later in the day. Snowfall totals from this system will range from 5 cm in southeast Manitoba to 30 cm or more in a large swath from the Manitoba-Saskatchewan border through Norway House to Gillam and east.”

Along with precipitation, strong winds with blowing snow and poor visibility is expected in open areas. Environment Canada goes so far as to warn about potential blizzard conditions over the Manitoba lakes and much of northeast Manitoba Monday night into Tuesday.

“But this will be a high impact storm for many areas, and the public should monitor forecasts and future watches and warnings as this system develops,” the statement concludes.