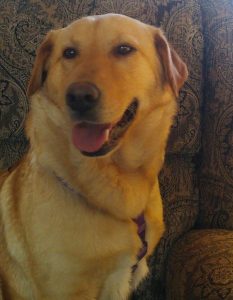 A dog rescue group is desperately trying to locate a pregnant dog who escaped from her foster home in Stonewall, Manitoba.

Sunshine is a golden labrador retriever mix who has tested positive for heartworm disease.

Manitoba Underdogs Rescue says the pooch escaped on March 1 and was last spotted on Monday east of Stonewall.

“We’ve had dogs escape before but we’ve always been able to catch up with them pretty quick. Poor Sunshine is terrified and in need of veterinary care. With the storm coming we’re desperate to get her back.”

MUR says Sunshine slipped out of her collar and is no longer wearing identification tags.

“She’s travelled pretty far north in the last few days and then back to Stonewall. She’s been seen near Petersfield, Selkirk, and Stonewall. We’re asking everyone to be on the look out for our girl even if you’re not in the Stonewall or Selkirk area.”

Anyone who sees Sunshine is asked to remain in their vehicles and report the sighting to her foster dad, John, at (204) 461-2672.