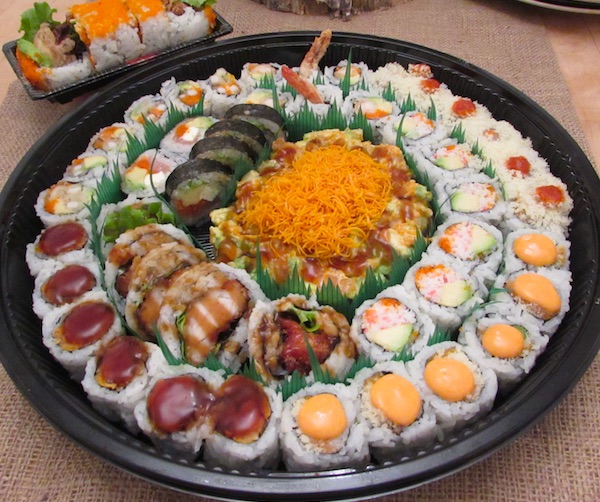 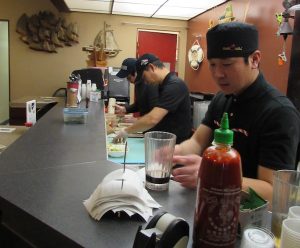 Sometimes even food aficionados want to throw down their aprons and exit the kitchen. One Friday I hosted a dinner for 25 people in our home and the next evening cooked for and hosted another social event for 40. Come Sunday evening I really wanted to consume something that I had not prepared but was mindful that we have been successful in keeping our new year’s resolution of careful eating. Sushi was just the ticket.

Sushi Cushi (1045 St. James Street) is en route to our youngest daughter’s home so we placed our order and were on our way to pick it up 10 minutes later. Upon entering, the restaurant was completely full so it was a good thing we were taking out. Both the room and the staff were cheerful and pleasant.

Even the serious sushi chefs momentarily broke their concentration to break into smiles.

We selected the Blue Ocean platter recommended for three or four persons but after sampling one piece of each roll, all four of us declared that we could not eat another thing. Had we left the table immediately this may have been true but as we chatted and lingered, chop sticks were spearing our favourites for second tastes. In spite of this, we still left a sushi feast for our daughter and her husband to enjoy the next day.

Every roll tasted freshly made with excellent ingredients. We especially enjoyed Bite Me made with asparagus and smoked salmon, Bakudan (a food explosion) with chopped tuna and chili sauce and the Blue Ocean including cream cheese and tuna.

In the centre of the platter was sushi pizza which turned out to be everyone’s favourite. The “crust” was made from formed rice that had been topped with salmon, avocado and masago (roe from a salmon like fish). The classic rolls entitled Teriyaki Chicken, Spider, Tempura Yam, Calamari, Californian and Dynamite were equally scrumptious but not especially unusual.

Sushi Cushi is owned and operated by Dong Noh Owner. They are open weekdays from 11:30 a.m. to 10 p.m.; Saturday and Sundays from noon to 10 p.m. and noon to 9 p.m., respectively. All-day menu available. Wheelchair accessible.