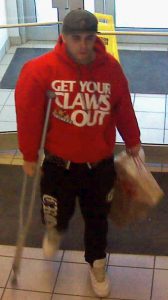 RCMP say this man duped a victim on Kijiji by passing off a box full of book and binders as a PlayStation 4. (RCMP HANDOUT)

A man who thought he was purchasing a PlayStation 4 Uncharted edition on Kijiji ended up with a box full of books and binders.

RCMP say the victim met the seller at around 2:40 p.m. last Saturday at a gas station at Deacon’s Corner in the RM of Springfield. The victim paid him $230 in cash and attempted to open the box several times, but was distracted when the suspect kept on talking.

Surveillance photos show the suspect entering the gas station using a crutch, but police say he left without using it.

He is described as Caucasian, approximately 5’10” and 200 pounds. He was wearing a red hoodie with the slogan “Get Your Claws Out,” black sweat pants with the emblem “CROOKS” on his right leg, white sneakers and a grey baseball cap.