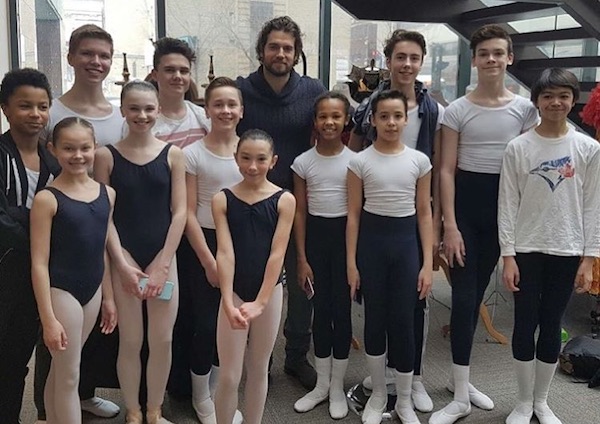 Hollywood heavyweights in Winnipeg this winter have been taking in the local sights while not busy on area film sets.

The latest actor to appear in public on Friday was Henry Cavill, who is starring in “Nomis,” alongside Stanley Tucci and Sir Ben Kingsley.

Cavill paid a visit to the Royal Winnipeg Ballet to tour the Graham Avenue studio, and meet the dancers and students.

The RWB posted a photo of his visit to their Instagram page.

Actor Henry Cavill found time between filming to drop by the Royal Winnipeg Ballet today, tour our building, and meet some of our dancers, staff and students! Thank you, Henry, it was such a pleasure to host you! . #RWB #RoyalWinnipegBallet #YWG #MB #Winnipeg #Manitoba #OnlyInThePeg #ExploreManitoba #HenryCavill

Cavill recently made headlines in Winnipeg for venting about the freezing weather conditions on social media during some of the movie’s outdoor shoots.

“A vital visit! Everyone should come!” Actor and filmmaker Stanley Tucci found time between filming to explore #HumanRights #AtCMHR. pic.twitter.com/8cXUCY9QHw

Filming of “Nomis” began in February in Winnipeg. The story follows an American police force who trap an online predator. The production also stars Alexandra Daddario.

← Previous: Stretch of Wellington Crescent Closed to Vehicles on Sunday Next: When It Comes to Class Size, How Big is 'Small'? →
Tags: Film | Movies | Winnipeg