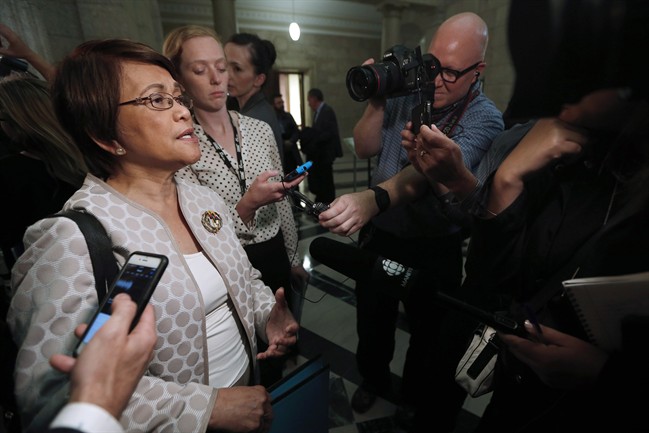 Manitoba’s interim NDP leader Flor Marcelino speaks to media after the provincial budget is read in the Manitoba Legislature in Winnipeg, Tuesday, May 31, 2016. (THE CANADIAN PRESS/John Woods)

WINNIPEG – Manitoba New Democrats have rejected a push to allow every member a vote on the party leadership — a decision a political analyst says could favour author and indigenous activist Wab Kinew.

“The old status quo system has tended to reward people who were connected to the caucus or to some of the leading organizations that form part of the NDP,” said Paul Thomas, professor emeritus of political studies at the University of Manitoba.

Kinew, a political rookie, was brought into the party as a star election candidate last year by former premier Greg Selinger. He has said he is putting together a team for a possible leadership bid and will make a formal announcement soon.

The fact the party is keeping its delegate system — where representatives from each constituency and labour union vote for the leader — favours an establishment candidate such as Kinew, Thomas said.

Kinew said if he enters, it will still be a tough race.

“I wouldn’t take anything for granted. I mean, if I do decide to put my name forward, I’m going to work really hard to win everyone’s support,” Kinew said.

The one-member-one-vote idea was backed by Steve Ashton, a former cabinet minister who has already run twice for leader unsuccessfully.

Ashton’s previous leadership bids have never garnered support from any of his cabinet colleagues. He worked to sign up hundreds of new NDP members in targeted constituencies, leading to accusations much of his support comes from people who are not truly connected to the party.

Ashton expressed disappointment at the decision.

“It’s deja vu all over again, to quote Yogi Berra. We’re back to the system we had. I just hope in the future there’s an opportunity to perhaps try again,” he said.

Whether Kinew can win the leadership will depend on whether any other establishment candidates emerge, Thomas noted. The only official candidate so far is Michelle McHale, a social activist who is new to the party and who has no big-name endorsements.

The leadership-rule debate took up almost the entire first day of the annual convention.

The setback for Ashton is not complete, however. He had enough supporters Saturday to block changes proposed by the party establishment that would limit how many delegates large constituencies could have.

In 2015, Ashton’s team drove up membership numbers in The Pas, making it the largest NDP constituency, and got 145 delegates. Some constituencies had only five delegates.

Another change approved by the NDP Saturday will force party leaders to undergo leadership reviews after each election which the party doesn’t win. The system, already used by most other parties, will allow delegates to vote on whether to force the leader to step down.

The NDP has been struggling to unite and raise money since losing last April’s election after 17 years in power. Selinger subsequently stepped down as leader and has been replaced on an interim basis by Flor Marcelino. A more permanent leader is to be chosen in September.

Marcelino called on the party Saturday to end the squabbling.

“We owe it to the people of Manitoba … to get our act together and be united.”