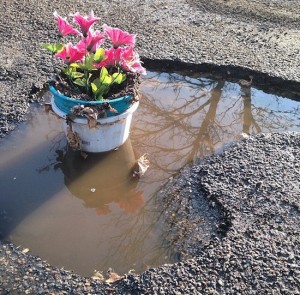 A flower pot sits in a crater on Olive Avenue, as submitted through CAA Manitoba’s Worst Roads campaign in 2015. (CLAUDINE GERVAIS / CAAWORSTROADS.COM)

WINNIPEG — Aside from the weather, talking about the condition of Manitoba’s roads is a great conversation-starter in this province.

For the sixth year in a row, CAA Manitoba’s Worst Roads campaign is enlisting the help of motorists to determine which streets need the most attention.

“Many streets around Winnipeg suffer from the same sorry state, pockmarked by potholes and crumbling curbs. But thanks to record infrastructure investments and a new focus at City Hall, roads like Hector (Avenue) are now being fixed,” said Mike Mager, president and CEO of CAA Manitoba.

“We still have more work to do, however – if you asked any driver, they would tell you many of our other roads are still in unacceptable condition. That’s why CAA Manitoba runs this campaign every year: to get feedback from you to pass along to the government about where your concerns and priorities stand,” Mager added.

Rural roads made up the top submissions in 2016, with streets in Carmen, Brookdale, Goodlands, Boissevain and Gillam cracking the top 10. In Winnipeg, Ness Avenue, Liberty Street, Pembina Highway and St. James Street also made the list.

A total of 660 roads were nominated last year and 8,800 votes cast during the four-week initiative. CAA then uses the data to lobby levels of government to make the necessary repairs and reconstruction.

You can vote for which road you think is the worst by visiting CAAWorstRoads.com. Motorists can also vote this year for which roads they feel have improved the most. Voting runs until midnight on April 17.