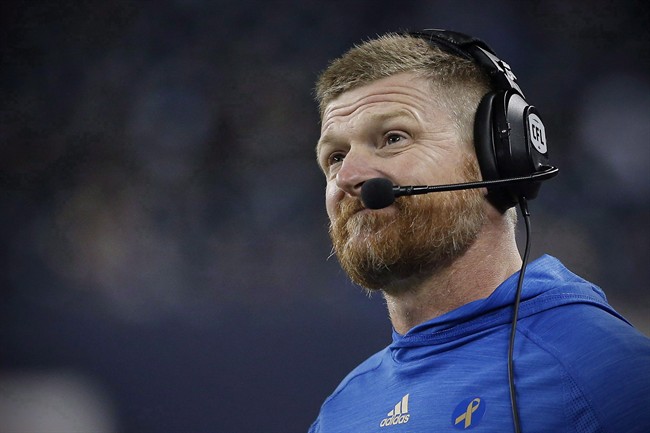 Winnipeg Blue Bombers head coach Mike O’Shea grimaces after watching a reply of an Edmonton Eskimos’ interception during the second half of CFL action in Winnipeg Friday, September 30, 2016. (THE CANADIAN PRESS/John Woods)

Mike O’Shea is known today for leading the Winnipeg Blue Bombers on a journey that he hopes will eventually win the team a Grey Cup under his tenure with the football club.

But on Wednesday night in Regina, O’Shea was called upon to be inducted into the Canadian Football Hall of Fame for his time as a player, for which he played 16 CFL seasons.

The three-time Grey Cup champion played 271 games during his on-field career, beginning with the Hamilton Tiger-Cats in 1993 after initially being chosen by Edmonton in the 1993 Canadian Football League Draft.

“On behalf of our entire organization, I would like to congratulate Mike on an honour that was both expected and extremely well deserved,” said Blue Bombers president and CEO Wade Miller.

“Mike has carried himself like a hall of famer from the moment he entered this league, and continues to do so now as the head coach of the Blue Bombers. He is the true definition of what all professional athletes should aspire to be, and his accomplishments simply speak for themselves.”

O’Shea later played for the Toronto Argonauts from 1996 to 1999. He spent the 2000 season with Hamilton before returning to Toronto to play the final eight seasons of his CFL career. Through 2016, his 271 games are more than any other linebacker in CFL history and rank 18th among all players.

O’Shea enters his fourth year as head coach of the Big Blue to start the 2017 season.