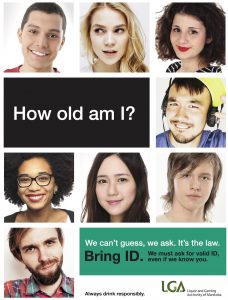 A new campaign is asking Manitobans to bring identification when they visit licensed establishments throughout the province.

The Liquor and Gaming Authority of Manitoba is targeting its campaign toward young adults in rural Manitoba who visit bars, restaurants or liquor stores. The campaign also reminds staff in licensed establishments to check the ID of youthful-looking patrons.

“Rural bars and restaurants have a different dynamic than those in Winnipeg,” said Coralee Dolyniuk, executive director of the Manitoba Restaurant and Foodservices Association.

“In smaller towns, it can be awkward for servers or bartenders to ask for ID from patrons who are potentially friends, neighbours or family members.”

The six-week campaign will include billboards and posters predominately in rural Manitoba.