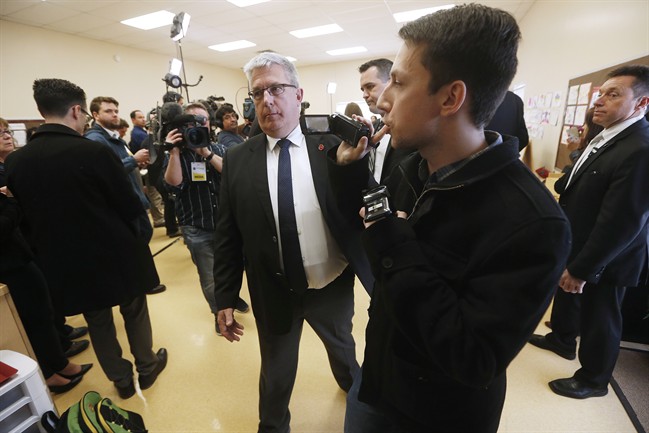 Heckler Josh Sigurdson is escorted out of the room as Prime Minister Justin Trudeau speaks at a YMCA-YWCA day care centre in Winnipeg, Wednesday, March 29, 2017. Trudeau was in Winnipeg to highlight their plan to spend $7 billion over 10 years to create more child care spaces across Canada. (THE CANADIAN PRESS/John Woods)

WINNIPEG – Justin Trudeau’s news conference at a Winnipeg daycare was interrupted by a protester who called the prime minister a scumbag.

Staff from the Prime Minister’s Office say the man gained entry to the event claiming to be a member of the “world alternative media.”

He carried a camcorder as he heckled Trudeau about the carbon tax while the prime minister answered other questions.

He also railed against what he called Trudeau’s “globalist counterparts.”

Security eventually led the man out of the room without incident.

Trudeau was in Winnipeg to tout child-care investments his government announced in last week’s budget.

“Shame on you and your globalist counterparts,” the man said as security kept a close eye on him. “You’re scumbags. You are an absolute scumbag.”