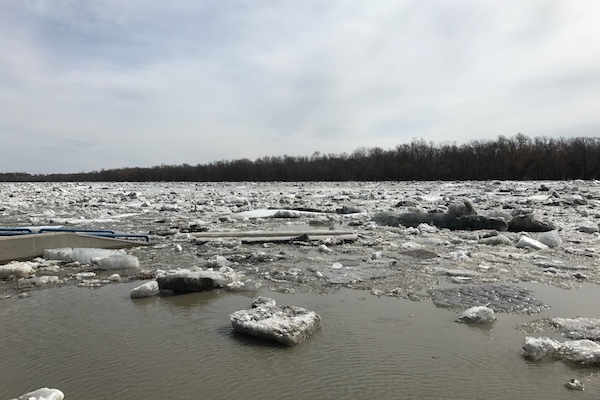 SELKIRK, Man. — The province has issued a flood warning for the lower Red River in Selkirk as ice jams raise water levels.

Chunks of ice were washing up on shore in the city north of Winnipeg on Thursday, drawing onlookers to Selkirk’s waterfront.

The province has positioned flood-fighting gear such as pumps, steamers and backhoes in areas of potential concern, mostly in the southwest region of Manitoba.

“A combination of rapid melt, ice jamming and blocked culverts may lead to a rapid rise in water levels on tributaries and may cause localized overland flooding. Municipal and provincial crews are thawing culverts on a priority basis,” the province advised in a flood bulletin.

The rising water forced the closure of the Selkirk Bridge to vehicle traffic, as well as a portion of Highway 204 at Highway 212. Nearby traffic signs at the intersection were quickly becoming submerged by early afternoon.

The Red River upstream of the floodway inlet is expected to crest on April 4 to 5 at a flow of 69,000 cubic feet per second (cfs).

Water levels on the Assiniboine River and its tributaries are also significantly increasing across much of southern Manitoba.

People are reminded to be watchful of local waterways, as flood conditions can develop quickly.

If ice conditions upstream allow for it, Manitoba Infrastructure will operate the Red River Floodway earlier than normal this year.