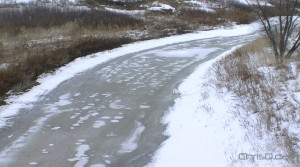 Much of southern Manitoba is experiencing overland flooding as ice jams occur on major rivers and smaller tributaries.

A ramp is being constructed by the province at the north end of Morris to maintain travel through the community on Highway 75, which is expected to remain open.

The water level at James Avenue in Winnipeg increased 1.2 feet overnight to 19.4 feet. This rise was due to an upstream ice run that created a surge of flows downstream. With the floodway in operation, water levels at James Avenue could decline to 19.0 feet on Sunday.