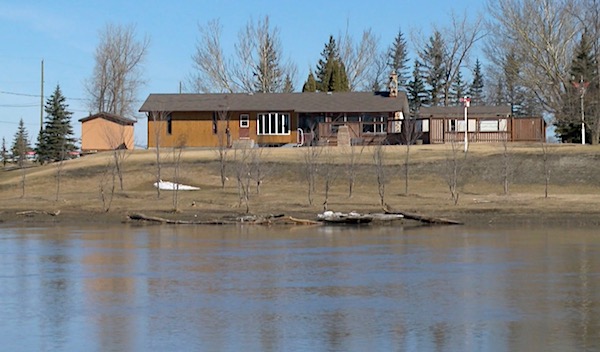 The Assiniboine River in Headingley west of Winnipeg on Thursday, April 6, 2017. (CHRISD.CA)

WINNIPEG — The Assiniboine River is rising in parts of the province, prompting flood watches and warnings in certain areas.

Manitoba Infrastructure’s Hydrologic Forecast Centre says ice has moved out on some rivers but remains in place on others including portions of the lower Assiniboine River and northern Manitoba.

A flood watch remains in effect for the area between Portage la Prairie and Headingley as flows on the lower Assiniboine River could gradually increase to about 12,000 cubic feet per second by the weekend.

Overland flooding has subsided in southern Manitoba and water levels are also decreasing along the La Salle River and Morris River.

A flood warning remains in effect for the Birdtail Creek, upper Assiniboine River from the Shellmouth Dam to Holland, Pelican, Rock and Oak lakes, and the Pembina and Souris rivers. A flood warning has also been issued for Dauphin Lake and the Souris River.

The Red River in Winnipeg crested earlier this week. As of Thursday, river levels at James Avenue were 18.3 feet.