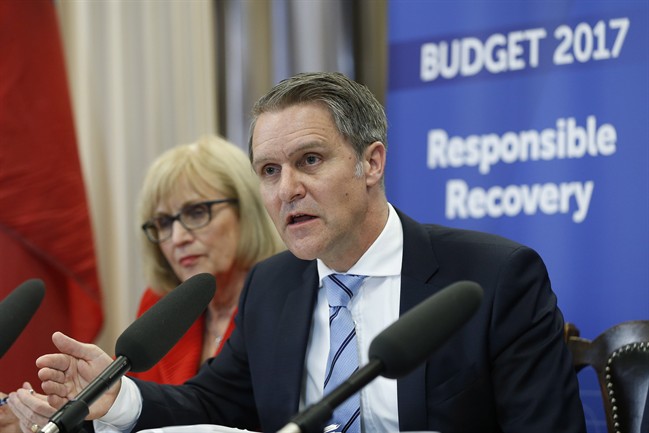 Manitoba Finance Minister Cameron Friesen speaks to media as Janice MacKinnon, Co-chair of the Advisory Panel on Fiscal Performance, listens in at a press conference before the provincial budget is read at the Manitoba Legislature in Winnipeg, Tuesday, April 11, 2017. (THE CANADIAN PRESS/John Woods)

WINNIPEG – Post-secondary graduates are taking a financial hit in a relatively stand-pat budget tabled by the Manitoba government Tuesday that holds the line on spending and makes a modest dent in the deficit.

The budget forecasts an overall deficit of $840 million this fiscal year — $32 million less than last year.

The biggest change is the phase-out by next year of an income-tax rebate on tuition for post-secondary graduates who stay and work in the province. It’s worth up to $2,500 a year per person and was introduced by the former NDP government as an incentive to keep grads from leaving.

“We can’t continue to support programs that have no demonstrable positive effects and there was no data or support for that program’s efficacy,” Premier Brian Pallister said.

The Canadian Federation of Students said the rebate is badly needed by students who graduate with big loans.

“We’ve already gotten so many messages today from people who … don’t know what they’re going to do to be able to pay off their student debt,” said spokesman Michael Barkman.

There are no increases to personal or business taxes, but a number of tax credits are to be capped or cut.

A tax credit for research and development is being reduced to 15 per cent from 20. And a credit for unpaid caregivers who help relatives stay in their own homes is being capped for the first time at $1,400 a year.

One tax credit is to be increased. The maximum credit for donations to politicians and political parties is rising to $1,000 from $650.

“It’s actually now more in balance with the other provinces across the country,” said Pallister, whose government earlier announced it is raising the maximum annual donation people can make to politicians to $5,000 from $3,000.

The budget keeps a leash on spending in major departments at or near the rate of inflation. Health spending is to rise 1.8 per cent, while education will see an extra 1.1 per cent.

The Canadian Union of Public Employees said the small increases are likely to mean job cuts.

“I don’t have faith in words like ‘efficiencies’ and ‘innovation’ being thrown around without translating that into privatization and job loss,” said CUPE Manitoba president Kelly Moist.

The Tories have promised to balance the books by 2024 and cut the provincial sales tax to seven per cent from eight by 2020. Finance Minister Cameron Friesen said the budget is a measured step in that direction.

“Our provincial neighbours are pursuing different paths involving stark decisions,” Friesen said in an apparent reference to the recent Saskatchewan budget that brought in deep spending cuts and a sales tax increase.

“With this budget, Manitoba charts its own balanced course — one that will confront the fiscal dangers we face with prudence, without higher taxes, deep cutbacks or unsustainable spending.”

There is some new cash in the fiscal document.

The government plans to create 501 new licensed child-care spaces and 50 home-based ones. More than $9 million is to be available for new cancer drugs. Other money is going to improve care at three northern nursing stations and bolster the provincial ambulance fleet, Friesen said.

Workers making a minimum wage will have to wait to see whether their pay will be frozen for the second year in a row at $11 an hour. The former NDP government announced increases to the wage every year in its budgets, but the Tories left the rate unchanged in their first budget last year.

“There won’t be an announcement specifically on minimum wage in this budget,” Friesen said. “I’ll tell you to stay tuned a little longer.”

— No increases to personal or business taxes.

— Department spending increases are being held at or near the rate of inflation: 1.8 per cent for health; 1.1 per cent for education.

— Tuition fee income-tax rebate for post-secondary graduates who stay to work in Manitoba — worth up to $2,500 a year per person — to be phased out by 2018.

— Primary caregiver tax credit for people looking after relatives in their homes capped at $1,400 a year.

— Research and Development Tax Credit for scientific development reduced to 15 per cent from 20.

— Maximum tax credit for political contributions to increase next year to $1,000 from $650.

Future taxpayers: Overall deficit is $840 million, but that is $32 million less than last year.

Political parties: Maximum tax credit for political donations is being boosted to $1,000 from $650 next year.

Working parents: The province says it is creating more than 500 licensed child-care spaces in both daycares and homes.

Students: A post-graduate tuition fee income-tax rebate for students remaining in Manitoba to work is being cut starting next year. It was worth up to $2,500 a year per person.

Caregivers: A tax credit for unpaid caregivers who help relatives stay in their own homes is being capped at $1,400 a year.

Researchers: The Research and Development Tax Credit for scientific development is being cut to 15 per cent from 20.

Low-wage earners: For the second year in a row, the budget makes no mention of an increase to the province’s $11-an-hour minimum wage.