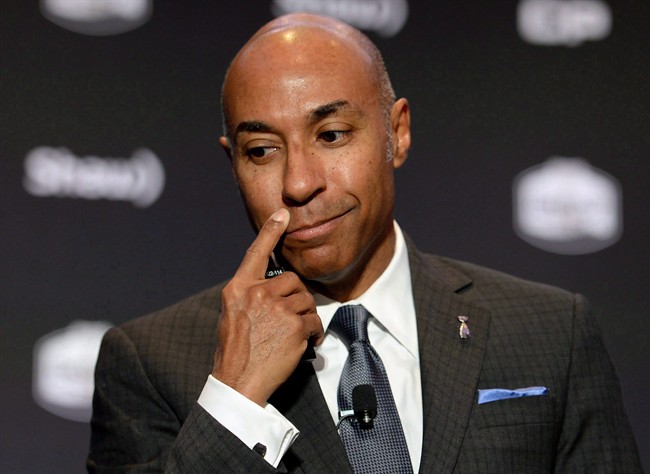 TORONTO – Jeffrey Orridge’s tenure as CFL commissioner was a short but tumultuous one.

The league dropped a bombshell Wednesday by announcing Orridge and the CFL’s board of governors mutually agreed to part ways effective June 30. The stunning development comes just over two years after Orridge was hired amid much fanfare as the first African American chief executive of a major North American sports league.

No official reason was given for the move, but in a statement Orridge said he and the CFL’s board of governors didn’t see eye to eye on the league’s future. Orridge succeeded Mark Cohon, who spent eight years on the job.

“It has been an honour to serve as CFL Commissioner and help to prepare this historic league for the future by deepening our relationship with fans and sponsors, increasing its relevance with the next generation, and expanding our reach beyond Canada,” Orridge said. “While the Board and I have differing views on the future of the league, we both believe passionately in this game, its players, its partners and its fans.

“I wish the CFL great success in the future.”

The weight of expectation on Orridge’s shoulders was immediate. On the day he was formally unveiled as CFL commissioner, one of the first questions Orridge faced was how he was going to deal with the Toronto Argonauts’ muddled ownership issue.

Fortunately for Orridge, interim commissioner Jim Lawson — the league’s chairman — had pretty much negotiated the sale of the franchise in May 2015 to Larry Tanenbaum, the chairman of Maple Leafs Sports and Entertainment, and Bell, with the team relocating to a refurbished BMO Field last season.

Orridge did come under fire for the CFL’s fallout with the Canadian Centre for Ethics in Sport that led to the league not having drug testing for more than a year. Ultimately a new policy was reached with the CFL Players’ Association and implemented in the collective-bargaining agreement.

Last November, Orridge drew widespread criticism when, in his Grey Cup address, he denied the existence of a link between playing football and the development of Chronic Traumatic Encephalopathy (CTE). Orridge’s comments came months after Jeff Miller, the NFL’s top health and safety officer, acknowledged a link between football-related head trauma and brain disease, the first time a senior league official conceded football’s connection to CTE.

The CFL was named in a $200-million class-action lawsuit over concussions and brain trauma. But in March, a B.C. judge dismissed former player Arland Bruce III’s lawsuit against the league, Cohon, neuroscientist Dr. Charles Tator, the CFL Alumni Association and every team in the league.

Bruce claimed the defendants downplayed the effects of repetitive head trauma and misrepresented player safety issues about concussions. The case is on appeal.

Before joining the CFL, Orridge negotiated the media rights to several Olympic Games for the CBC, but was also with the broadcaster when it lost control of its NHL rights to Rogers in 2014.

“In his time with the CFL, Jeffrey worked tirelessly to promote player health and safety, the integrity of the League on and off the field, and the values of diversity and inclusion,” Lawson said. “Jeffrey played an important role in developing the league’s strategic plan which has, in a short time, helped to elevate some key metrics that underpin the health of the league.

“On behalf of the Board of Governors we wish Jeffrey continued success and thank him for his hard work and integrity during his tenure with the CFL.”